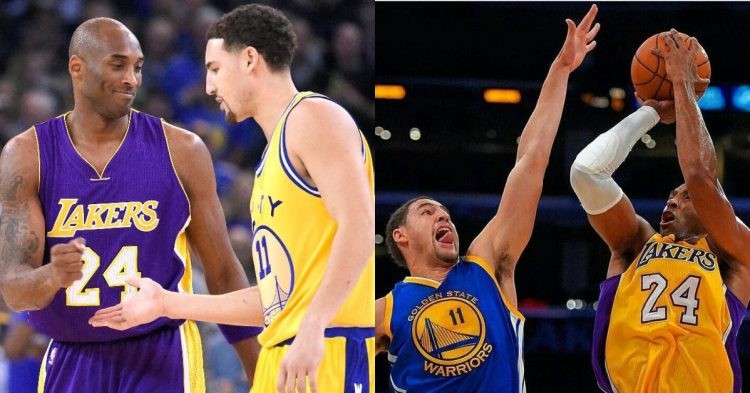 Kobe Bryant is one of the most influential NBA players to have ever graced the game. The way he portrayed himself on the court as a true winner won him millions of fans around the world. Kobe won 5 NBA championships during his illustrious career, all of which were with the Los Angeles Lakers.

Apart from what he achieved on the court, many fans also looked up to Bryant. His mentality was truly unparalleled. He had won everything there was to be won and he was still working hard. That speaks at length about how hungry he was for success. With this, he inspired millions, even those who are NBA champions in the current day.

One of the many NBA players to be a Kobe Bryant fan would be Golden State Warriors star, Klay Thompson. On the latest episode of the “All The Smoke” podcast, Klay recalled the moment when he met Kobe up close for the first time. Thompson spoke about the Lakers games he used to attend with his dad, Mychal Thompson. He was also an NBA player back in the day.

He said, “Kobe would come out in 30 minutes and I’ll just be like, locked in, like ‘I can’t believe I get to see this.'”

In addition to that, the American also mentioned the time he sat at the table with Bryant to eat. He claims that he did not say anything when Kobe sat next to his dad because of how star-struck he was by the legend. Speaking about that moment, he said, “That was one of the best moments of my life. That’s all I needed, that energy being around him is all I needed to know what I wanted to do with my life.”

The 32-year-old also added, “We were in China together for 2013 Global Games, me and Chris DeMarco couldn’t sleep so we went up to the weight room and we were doing dumbbell bench press and I feel a tap on my shoulder. I look behind, it was Kobe, he had his black shades on and his hoodie. And all he said to me was, ‘What’s up.”

The fact that Kobe knew he had to say something to Thompson was when Klay realized he was doing something right. Moreover, when Kobe spoke about it in an interview, Klay could not believe that his role model had that good of a memory.

“‘This is crazy man, you’re like a God to all of us.’ That’s how I felt every time with Kobe, it’s like ‘I can’t believe I’m watching you, man. I know everything about your career, I remember when you won the dunk contest, between the legs when you made the first All-Star game in 98.”

Speaking about the times he faced his idol on the court, “Game 6 Klay” reveals that he saw Kobe as a “God” and how big a fan he is. The pair faced each other 12 times in the NBA, where The Black Mamba came out on top on 7 occasions. Klay averaged 19.1 points in those games and even scored 41 points in 2014, in front of the legendary Kobe himself.