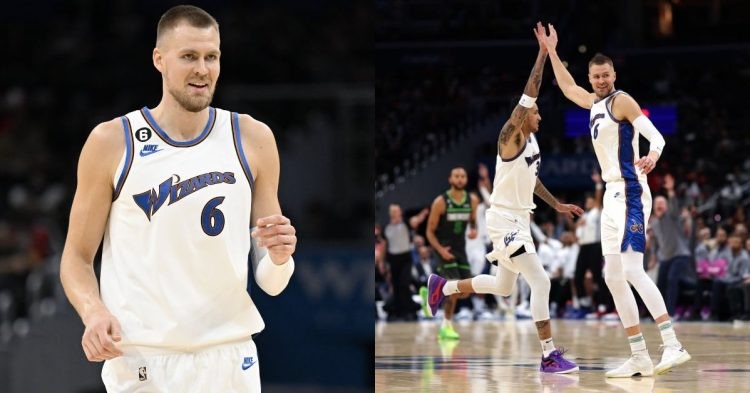 Height has always been a major talking point in the NBA. Since the early days, the height of any player in the NBA has proven to be an advantage. This is mainly because of the reach and wingspan these players have. In the past, NBA legend Shaquille O’Neal was always believed to be the tallest. Currently, one player who is in the conversation to be one of the tallest players in the league would be Kristaps Porzingis.

Not many would have heard about Kristaps Porzingis. He has been in the NBA for seven years now after the New York Knicks selected him as the 4th pick in the 2015 NBA Draft. When it comes to Kristaps’ height, many have the  question of whether he is the tallest player in the league right now.

This has been one of the most asked questions online as people wonder how tall he is. He stands at 7 ft 3 in tall and towers over every other NBA player he plays against. Together with that, Porzingis boasts 7 feet 6 in wingspan.

Who is the tallest player in the NBA?

The conversation of the tallest players in the NBA has always been interesting. However, now, it is none other than the Houston Rockets’ Boban Marjanovic. The Serbian is 7 ft 4 in tall. He is surely the tallest active NBA player. However, Kristaps isn’t far behind as well. He is just an inch shorter, which might not seem like a huge difference.

Porzingis has played for different franchises, such as the likes of Dallas Mavericks, and the Washington Wizards, whom he is playing for right now. The Latvian has managed to use his height to his advantage and has been a decent scorer in the NBA over the years. According to statmuse, Kristaps has averaged 19.0 points, 1.6 assists, and 7.9 rebounds per game in his career. He has also made one All-Star appearance.

The biggest issue that Kristaps faced in his career was the injuries. We all know that he has been quite injury-prone over the years and this has raised the question if he’s actually good. An interesting fact is that he was suffering from anemia when he was a young basketball player. However, he has managed to overcome that and cement his place on the Wizards roster.

The 27-year-old’s shooting from deep is quite underrated, as most only look at the towering giant. Speaking of his height once again, he might not be the only player to be 7 ft 3 in from next season. The entire NBA world must have heard of a young player called Victor Wembanyama. Many believe that the young player will become the tallest player in the NBA soon.