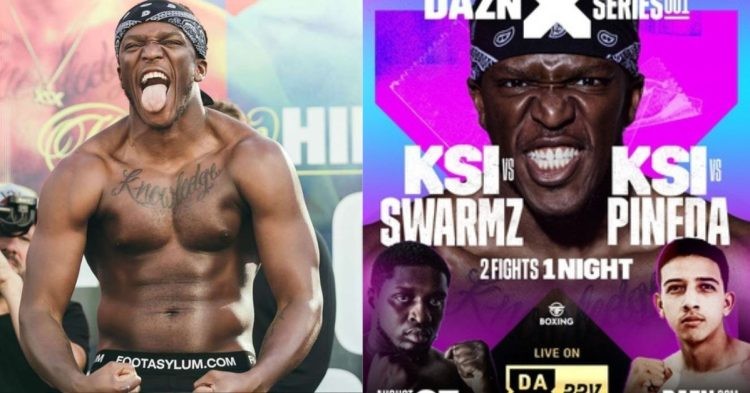 KSI returns to boxing this weekend at O2 Arena in London

YouTube star-turned-boxer KSI returns to the boxing ring this weekend after three years since his professional debut against fellow Youtuber-turned-boxer Logan Paul in 2019. KSI won this bout via split decision and now he prepares to face two opponents on the very same night.

KSI, real name Olajide Olatunji, will be making his comeback against rapper Swarmz and Mexican professional boxer Luis Alcaraz Pineda in a double-header at London’s O2 Arena on 27th August.

The online sensation started with amateur bouts against Joe Weller and Logan Paul. Only after beating Logan in an amateur bout, he turned pro and competed professionally in his rematch win over the latter.

Recently, YouTube boxing has become the new buzz in the combat sports world with famous internet personalities trying their luck in this sport. Logan’s brother, Jake Paul has also made plenty of waves after beating former UFC stars Tyron Woodley and Ben Askren in a professional boxing bout.

According to sources, KSI will be hoping to fight Jake Paul in near future to prove who the best Youtuber boxer is. This is why the British Youtuber is pushing himself and going through such a tremendous test.

But before that, he will have to win his comeback fights this weekend which is such a tremendous task in itself. KSI has always made his boxing entrances iconic way when he is a music artist.  Let’s see about his walkout song and what makes it special.

On Point by KSI – Music Video and Walkout Song of KSI

The music video for “On Point” was performed by KSI who also is a Youtuber and rapper. This song was produced by JT, Wallis Lane, Kes Knoxa, and Heat On Da Beat, and co-directed by Konstantin and Meji Alabi. It was released to KSI’s YouTube channel on 17 August 2018.

“On Point” was independently released for digital download and streaming on 17 August 2018 as a standalone single, in the build-up to KSI’s boxing match against Paul. It is a diss track aimed at American YouTuber Logan Paul, released before their amateur boxing match.

In his verse, KSI alludes to his forthcoming boxing rematch against American YouTuber Logan Paul. The song was performed live by the three featured artists Rick Ross, S-X, and Lil Baby.

Before the rematch between KSI and Logan Paul, Rick Ross and S-X performed the song in the ring during KSI’s walkout, providing the ultimate flex on Logan Paul. The rematch was held on 9 November 2019 at the Staples Center in Los Angeles, United States, which KSI went on to win via split decision.

As per the report, this come weekend, KSI will have two walkout songs but the other one is not specified. Also, the main event will have a surprise Guest/ feature.