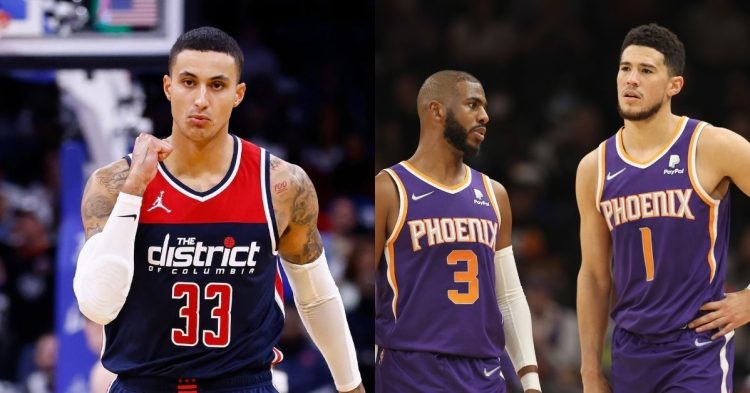 With a record of 64-18, they had finished 1st in the Western Conference. Despite having a talented roster, they could only beat the New Orleans Pelicans in the First Round. The Suns fell to the Dallas Mavericks in the Western Conference semifinals. This season, they have been quite decent in the league. The Suns are still one of the clear favorites to make the playoffs. However, James Jones, the Suns GM, wants to strengthen the roster further.

Recently, Shams Charania reported that the Suns are eyeing up to land former LA Lakers star Kyle Kuzma. There were no revelations on who they were looking to offload.

Together with Kuzma, the Suns are also reportedly looking to acquire Harrison Barnes from the Sacramento Kings, and Kenyon Martin Jr from the Houston Rockets. There is a pattern in the players who attract the Suns. The Arizona-based franchise is looking to trade a versatile player. In addition to that, they are looking for players who are confident enough to shoot and aren’t intimidated easily against bigger opponents.

Now, Kyle Kuzma might not be exactly that type of player, but he does hold his ground to an extent. He left the Lakers to join the Washington Wizards last year. He did win himself an NBA championship ring before switching teams. Since joining the Wizards, Kuzma has averaged 17.5 points, 8.4 rebounds, and 3.5 assists in 85 games played. The numbers show that he can be a decent player for the Suns.

The Devin Booker-led franchise hasn’t had much luck in the last few months. Both Jae Crowder and Cameron Johnson are out for at least a month. There have been no updates on their injury situation. In addition to that,

Chris Paul doesn’t seem to be getting younger. He has managed to play in only 10 games this season. At 37 years old, it indicates that his time in the league might be up soon. This explains why the Suns are looking to strengthen their roster right now.

When Johnson and Crowder are back from injury, they would have enough depth in the roster. Ultimately, this has been the difference between the Suns and the teams that have been beating them in the playoffs in recent times. If they manage to land Kuzma’s signature, along with Harrison Barnes, they would have a championship-contending team on their hands, which is what Devin Booker has been wanting for a long time.