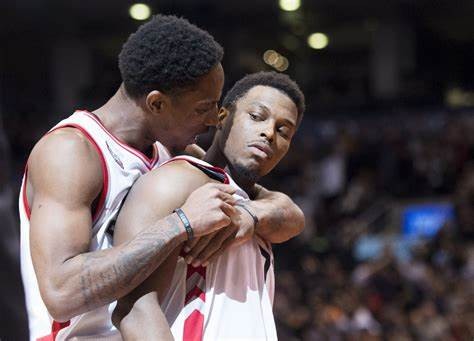 Kyle Lowry and DeMar DeRozan have been like brothers ever since they began playing for the Toronto Raptors. The duo was separated in 2019 when DeMar was traded to the San Antonio Spurs in exchange for Kawhi Leonard.  The trade proved to be fruitful for the Raptors. The North brought home their first-ever championship with Kyle Lowry, Fred VanVleet and Kawhi Leonard.

However true Raptors fans definitely miss the chemistry and brotherhood that Kyle and Deebo shared on and off-court. The North love the two stars as much as they love the 6ix God, Drake. The two of them are reportedly interested in a reunion on the court for the upcoming season.

According to sources, San Antonio Spurs star, DeMar DeRozan and Toronto Raptors point guard, Kyle Lowry is interested in joining the Lakers. The Lakers and Raptors were already in talks to trade Lowry. But the Lakers refused to include Talen-Horton-Tucker in the deal.

DeRozan, who starred at Compton High and USC, has interest in returning home to play for the Lakers, even if it is for less than the $27.7 million he earned last season in San Antonio, according to people not authorized to speak publicly on the matter. Though the Lakers didn’t acquire Lowry at the trade deadline, he remains interested in joining them, according to people with knowledge of his situation

Could Kyle Lowry and DeMar DeRozan reunite in Los Angeles?https://t.co/bApZnwki1u

Both Deebo and Lowry will become unrestricted free agents.  As amazing as it sounds, signing both these stars is going to be tough for the Lakers. It is also unlikely that Deebo and Lowry will take minimum deals. If the two former Raptors brothers end up playing together, The Los Angeles Lakers will most likely receive a lot of love from the Raptors fans as well.