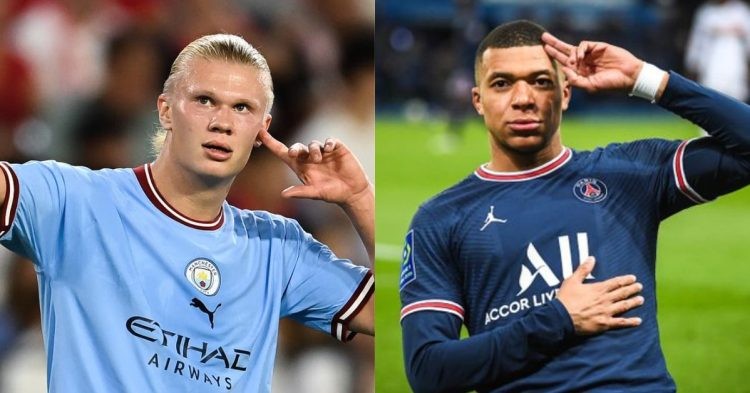 The era of Lionel Messi and Cristiano Ronaldo is drawing to a close but two new generation-defining players have well and truly arrived to take their place – Erling Haaland and Kylian Mbappe. The two players are set to dominate football for years to come, given they line up for two of Europe’s biggest clubs.

Mbappe burst onto the scene a couple of years earlier than Haaland, having caught the eye as a teenager in Monaco’s miraculous 2016-17 title win and run to the Champions League semi-finals. He’s since lifted the World Cup and won four Ligue 1 titles in five years with PSG and been wildly prolific for the Parisians.

Haaland is 18 months younger but was being talked up as one to watch as a youth prospect. Word was spreading of Alf-Inge Haaland’s son and how he managed three hat-tricks in one game against Honduras’ Under-20s and he’s more than living up to that early hype.

Which one will win first the Ballon d'Or Award? 👀 pic.twitter.com/YjYkIR9O9p

The seeds of a new rivalry were sewn back in March 2020 when PSG knocked Haaland’s Dortmund out of the Champions League and celebrated by imitating the Norwegian’s ‘Zen’ pose celebration. The two players haven’t been shy about speaking about one another when reporters have asked them about the potentially era-defining rivalry.

“When I saw Mbappe score the hat trick, I got free motivation, so thanks to him,” Haaland said of Mbappe’s hat-trick against Barcelona back in February 2021 – before going on to bag a brace against Sevilla. “He scored some nice goals, and I got a free boost from him. So yeah, it was nice.

Among the younger crop of players, there are quite a few names who have already established themselves as stars as well. Amongst them, the two most high-profile ones are arguably France’s Kylian Mbappe, and Norway’s Erling Haaland and it is safe to say that Mbappe and Haaland are currently competing to establish themselves as the future superstar of world football.

So let’ look at who has the better statistics among Kylian Mbappe and Erling Haaland so far:

Kylian Mbappe has a slight advantage in this stat, as he has scored more goals as compared to Erling Haaland. Both of them started their international career in 2015/16 season. The Frenchman played for AS Monaco, while Haaland played for Bryne.

Once again as the stats depict, Mbappe has a massive advantage in this part of the game. The Frenchman being a complete player gives him a slight edge over the Norwegian as he hasn’t been able to provide much to his teammates.

Meanwhile, if we see the overall career including the individual accolades and trophies, Kylian Mbappe is way ahead of Erling Haaland. But as we see the Norwegian has been in scintillating form this season. Meanwhile, Mbappe is struggling a little with injuries and speculations off the pitch.