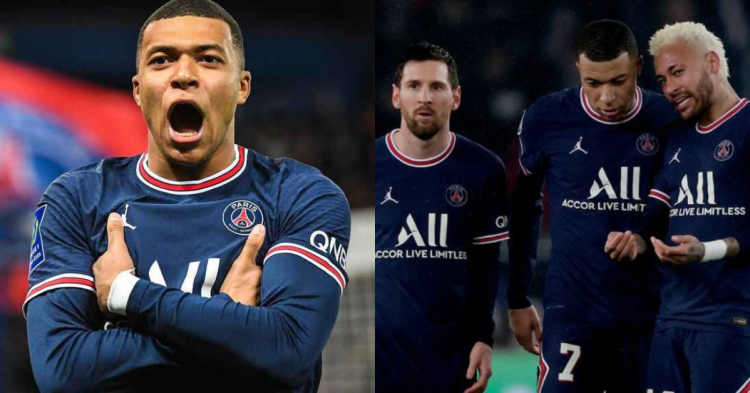 Kylian Mbappe choosing to remain at PSG and rejecting Real Madrid angered many football fans. Mbappe and PSG fans, on the other hand were delighted by this news. They believed Mbappe was happy at the club and that he chose to stay mainly for footballing reasons and not for money.

They keep breaking up and making up like some toxic relationship… we actually tired and don’t care anymore https://t.co/OxyKyZ0kml

Mbappe’s choice to stay may have been for footballing reasons, but to win trophies you need to be part of the team. Reports of late have suggested that Mbappe’s relationship with his teammates is completely broken. There have been public reports of rifts between Mbappe and Neymar.

Fans don’t seem to understand why Mbappe is behaving the way he is at the moment.

Some fans have suggested he isn’t happy at PSG because of Neymar and Messi’s upturn in form.

Another timely reminder of who the actual greats of the generation are, despite their fading years.

Mbappe calling PSG’s window a failure after choosing the manager, director of football, transfer targets, and forcing a €1billion contract for himself pic.twitter.com/MmibFL8kid

Some fans do understand the reason for his restlessness at PSG.

Kylian Mbappé was promised a different role by the PSG hierarchy. He does not want to play as a centre forward to accommodate Neymar and Messi.

PSG and Mbappe have to quickly find a way to resolve this issue, otherwise it could lead to many unfortunate and avoidable problems.

Neymar was recently asked about his relationship with French superstar Kylian Mbappe. The Brazilian refused to give a real answer. Of course Mbappe highly respects Messi, but fans aren’t pleased with the fact that Mbappe has got no assists this season, despite being in many positions to slip in Neymar or Messi.

Recent reports by Mario Cortegana also suggest that Mbappe has handed in a transfer request to PSG. PSG seem to be comfortably on top of their Champions League group but to win the competition and progress in the knockout stages, you need your best players playing their best football and with cohesion. In Ligue 1 they have the advantage over Lorient. The newly promoted side are hot on the French giants’ tails. The gap is of just 1 point ahead of this weekend.