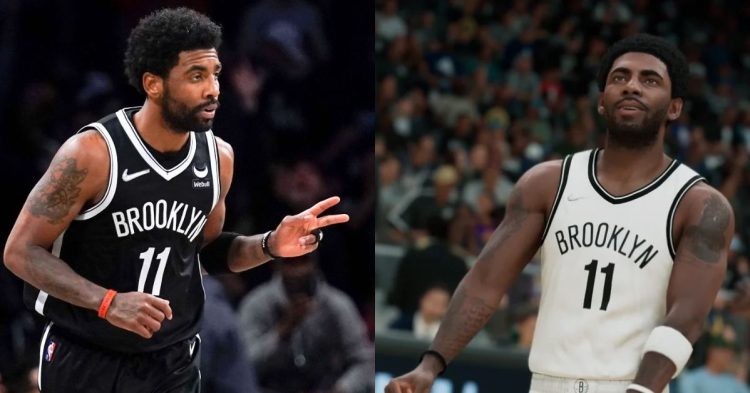 Kyrie Irving is the star point guard for the Brooklyn Nets. Several NBA analysts claim that he and Kevin Durant are the two of the most offensively talented teammates the game has ever seen. There is no arguing that Kyrie can be called a wizard or magician for his abilities on the court. His ability to control the ball and finish at the rim is second to none for a player his size.

Be that as it may, the NBA 2K23 creators have decided to give Irving an 89 OVR in NBA 2K23. Considering his unreal talent, any rating below 90 could be viewed as unfair. We should wonder why Irving was given a lower rating and how he ranks in comparison to the players with similar and higher ratings.

The NBA 2K creators have always been known for their strict ratings. However, comparing Kyrie Irving and James Harden, there is no arguing that Irving had a better season. He averaged 27.4 points, 4.4 rebounds, and 5.8 assists. Additionally, Kyrie shot an efficient 55% from the field, 41% from the three-point line, and 91% from the free throw.

These numbers speak to a 50-40-90 player. There are a handful of players in the league if any capable of being as efficient as Kyrie Irving.

On the other hand, James Harden had a down season and was not himself. The Beard averaged 22 points, 7.7 rebounds, and 10.3 assists. Moreover, he shot a much less efficient 33% from the three-point line. While Harden certainly averaged better rebounds and assists than Irving, that does not really mean much.

That is because Harden is a bigger player than Irving and should be able to rebound the ball better. Additionally, critics claimed that he was passing the ball so much this season simply because he was unable to score himself. We know the NBA 2K makers believe Harden deserves a high OVR. However, to place him on the same level as Kyrie is just not right.

Kyrie scored more points and was more efficient than Harden. James rebounded and assisted the ball more than Irving. We should decide for ourselves which aspect of the game matters more and whether NBA 2K23 got it right this time.