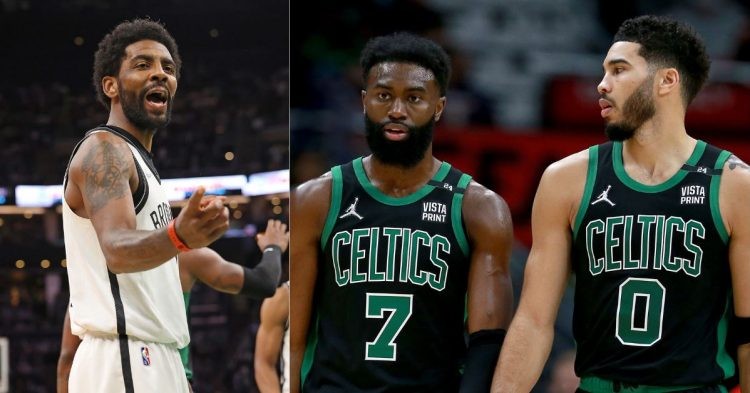 Kyrie Irving is considered one of the most eccentric basketball players in the league. He is truly a unique person and player always attempting to offer a different perspective on life. This has earned him a reputation as a pseudo-intellectual and someone who is simply pretending to be wise. Everyone is entitled to an opinion. However, some of Irving’s past statements have been controversial, to say the least.

We already know that Kyrie Irving, Kevin Durant, and the Brooklyn Nets were eliminated in the NBA postseason by the Boston Celtics. NBA fans will remember that they are Kyrie’s former team. He was accused of being toxic to their locker room and chemistry in his time with them.

In any case, Uncle Drew recently made a statement reflecting on his loss to his previous team. It is important to understand what Kyrie said and analyze how much truth there is to it.

There are several ways to look at what Irving said. It could simply be a case of “reverse sour grapes”. Perhaps he feels they were meant to lose simply because they ended up losing. It would be very difficult for Kyrie to convince us that he simply did not want to win.

The Brooklyn Nets star explained how the whole situation humbled him, ” It was meant to happen like that, motivation bro. We needed that humbling experience, especially going against the Celtics. It was already built to be that matchup. We gonna see them again. We gonna have to”.

Kyrie also got a bit emotional talking about his former teammates and how they have developed, ” They’re gonna be where they’re gonna be. But those young ones in Boston bro, I got to see them grow up. To see them do what they did last year, on the Finals stage, making it that far. I’m glad they had to go through us.”

This is quite a mature way of dealing with the situation. We are glad Kyrie is not feeling contempt or hate towards his former team. Moreover, we forget that the Nets eliminated the Celtics in the 2021 playoffs. Therefore, the rivalry between both sides is just getting started.

As Irving said, both teams will likely see each other again. We should wonder what would happen this time around.
Tags: Boston CelticsBrooklyn NetsKyrie IrvingNBA
Previous Post