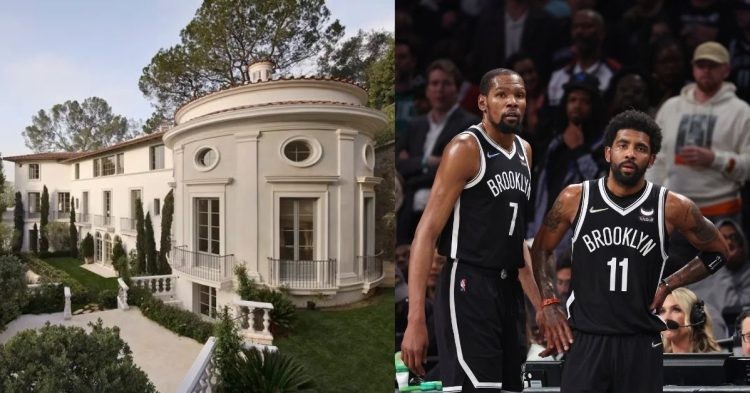 Kyrie Irving recently shocked the world by committing to stay with the Brooklyn Nets. He agreed to his $47m player option to stay for a final year with them. He was first brought in to be one of the main faces of the franchise, together with Kevin Durant. KD has recently handed in a trade request a couple of days ago to leave Brooklyn.

Reports have said that Kyrie & KD have not been in contact since their decisions. Since his teammate’s decision to leave, Kyrie has also chosen to leave, sources say. Kyrie has bought a mansion in LA for $3.7 million, according to NBACentral. Does that mean he is on the move?

The purchase by Kyrie may be a mere investment. However, the timing of it is what made it interesting. There were strong claims by many that Irving desired a reunion with his old teammate, LeBron James at LA Lakers. However, things changed completely a week ago. Again, this week, there are rumors that he’s looking to be traded after KD’s decision. It seems like Brooklyn is never short of drama.
If the Lakers truly want to go for Irving, it will take more than Russell Westbrook to lure the Nets into a trade. They have first-round picks at hand, but will they be looking to give that to the Nets for an aging Kyrie Irving? What I would say is that the Lakers should try and go for Kyrie. If they can offload Russ while they are at it, even better.
Although Kyrie is older now, he still has his magical touch. Last season, Irving managed to average 27.4 points, 4.4 rebounds, and 5.8 assists per game. These numbers are quite impressive for a finished player, as his haters claim.

BREAKING: LeBron James wants Kyrie Irving on the Lakers” more than anyone” and is “rooting hard” for the Lakers to acquire him 🤯

The Lakers are not a team that has been successful by picking young and talented players from the draft. Their last championship win came from smart trade deals for LeBron James and Anthony Davis. These two players were vital for the Lakers’ triumph in 2020 and they have struggled with injuries ever since.
Tags: Brooklyn NetsKevin DurantKyrie IrvingLA LAKERS
Previous Post