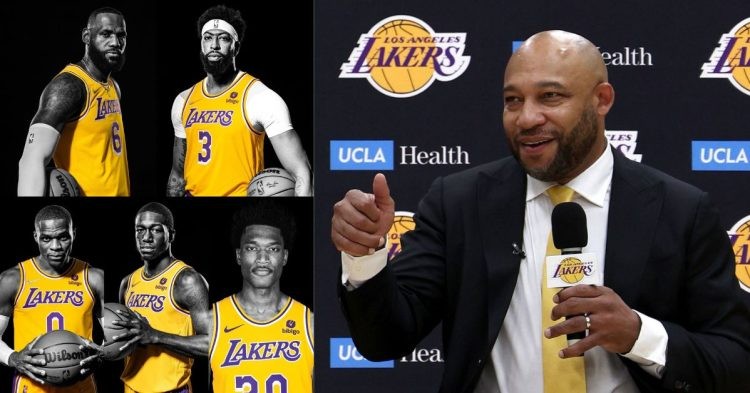 The Los Angeles Lakers are one of the biggest sports teams in the world. Ever since they ended the disastrous 2022-23 season after crashing out of the playoffs for the second consecutive time, the entire NBA world has been on them. The LA Lakers are looking to return to glory, and the offseason has been eventful. After signing LeBron James to a lucrative extension and landing Patrick Beverley, it shows they mean business.

In addition to that, the Lakers also managed to keep hold of Russell Westbrook. Although many fans may disagree with this decision, he still is a force to be reckoned with. With LeBron, Anthony Davis, Pat Bev, and Russell Westbrook all available for selections, the entire world has been waiting to see how Darvin Ham lines up the team.

According to reports, Ham said, “I’m just looking at everything. I see what fits with a small lineup, with Bron at the 4, AD at the 5, the traditional lineup. We haven’t paired Russ and [Patrick Beverley] together just yet, but we’ve been throwing out all types of lineups together out there.”

“K-Nunn [Kendrick Nunn] has been with some. Damian Jones and Wenyen Gabriel, Thomas Bryant — we’ve been rotating people all over the place just to see. But it just comes down to mixing and matching players. They’ve adjusted to it well and kept it rolling, and made the best of it. It’s been a good camp thus far,” Darvin added.

Will Russell Westbrook and Patrick Beverley start together for the LA Lakers?

The American also addressed fans’ criticism of Russ. He mentioned, “I’m thrilled to coach Russ. They try to dump on Russ, I’m like that was one of the things that got me excited about this job. He and I have had a great rapport since I’ve taken over the job man. Just text messages, phone calls, dinners.”

So Russell Westbrook, Kendrick Nunn, LeBron James, Anthony Davis, and Damian Jones has been the most common starting 5 for the Lakers this week, per Darvin Ham, though that could change going forward

“I locked in, I cornered his a** outside the elevator over at the Encore. He and I had a great conversation then. We all know what comes along with this businessman. People throwing your name in trade rumors. I’ve been in the league since 96, man.”

“I don’t know anybody that’s been on any team that hasn’t had their name thrown in a trade rumor or been traded. As a coach, they’ll be saying they ready to fire me, the media be saying they ready to fire me in a year, year and a half. Well, you can’t help but hear the noise sometimes. You just got to stay solid, do what you do and you’ll win in the end every time. I witnessed it with him,” Darvin also claimed.

Despite many fans’ claims for the organization to let Russ go, it seems like the player has the full support of the coach. In addition to that, he has also retained his starting spot despite rumors of him being dropped. What’s interesting is that Ham hasn’t said that Pat Bev might start, which was the initial expectation. However, it seems like he wants to try different teams and lineups out before arriving on the best one.