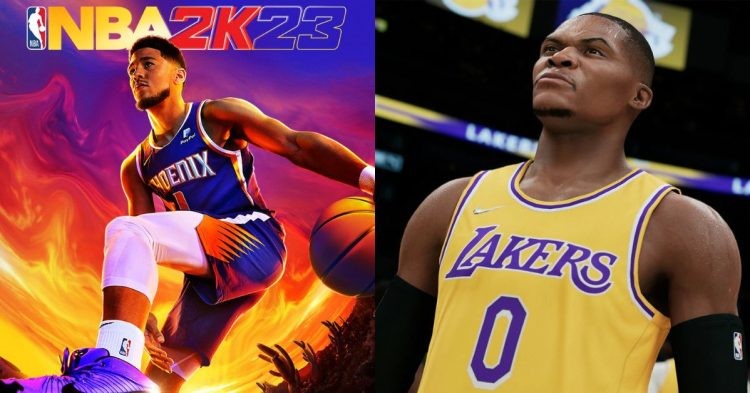 The release of the world-famous video game NBA 2K23 is just around the corner. The developers have announced that the world will get to experience the game from 9th September, which is just three days away. They have revealed many editions of the game with interesting game modes so far. The Michael Jordan edition, Dreamer, and WNBA are just a few editions of the game.

As we’re nearing the release date, some fans have managed to get their hands on the game early. Together with a few clips of the gameplay, the ratings for a few teams have been leaked on Twitter. One that caught the attention of many was the Los Angeles Lakers’ rating in NBA 2K23.

The leak did not include the rating for the whole team, but it did have the franchise’s biggest players. LeBron James, Anthony Davis and Russell Westbrook to just name a few.

LeBron has the highest rating on the team with a 96 overall, as expected. He was one of the best players in the league last season despite his age and struggles with injuries. The King averaged 30.3 points, 8.2 rebounds and 6.2 assists last season. He holds onto his rating from the 2K22 version.

Coming in second is Anthony Davis, with a 90 overall rating. His rating last year was a 92, which meant AD has a downgrade of two points in 2023. One of the main reasons for that would be the fact that AD missed many games due to injury.

The rating that we all want to know would be Russell Westbrook’s. 2K have not been generous to him and have given him a rating of just 78. For his standards, that is an extremely low overall rating. Throughout his career, Russ has always been a decent player. That said, he was also an exceptional player in his prime.

The last couple of years have been rough on Russ, as he has been struggling to replicate his old form in the current Lakers team. The chemistry between Russ, AD and LeBron has not worked out well. However, he has still shown glimpses of his old self at times. Although the may be massive downgrade is harsh from 2K, the decrease in Russ’ rating was inevitable.

With a new coach and a better team this year, Russ is looking more than likely to stay for the 2022-23 season. He will be looking to improve on his form and help the Lakers to an NBA championship this season.