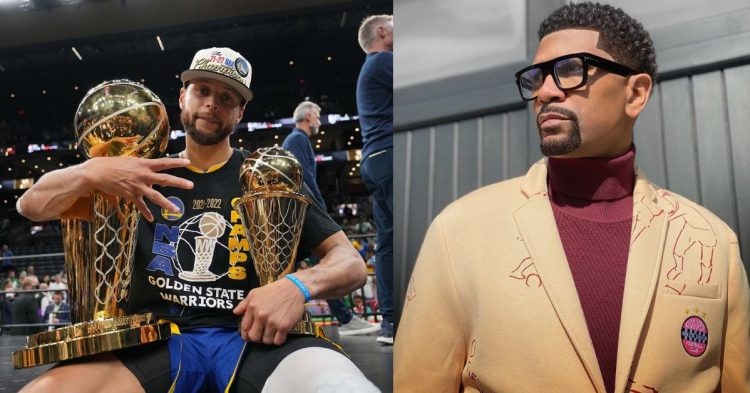 Stephen Curry has truly made a mark as one of the greatest players in the NBA. He won his fourth title with the Golden State Warriors this year, after beating the Boston Celtics in the 2022 NBA Finals. Steph tied with LeBron James this year for the most titles won among active players, together with a few other Warriors players.

Steph was on fire during the 2021-22 NBA season. He averaged 25.5 points per game, together with 5.2 rebounds and 6.3 assists. However, those numbers got even better during the finals. Against the Celtics, the 33-year-old averaged 31.2 points, 6.0 rebounds, and 5.0 assists in 6 games. That also included a 43-point masterclass in Game 4.

The American’s exceptional year has prompted many to comment on his success. One of them would be former NBA player Jalen Rose, who has praised the Baby Faced Assassin on many occasions. Recently, he spoke about how influential Curry was to NBA ESPN.

Rose said, “Right now? yes. When you see Lebron James, you can’t ignore the fact that he’s a physical specimen. But when you see Steph Curry, you’re like, “Him?” We’re the same height, we’re the same build, I can be him.”

“That influence plus his game and his championship pedigree and getting his finals MVP. Steph Curry is not a point guard or a shooting guard, I’ve called him the Vanguard for years. The leader of the new school,” the 49-year-old added.

He compared LeBron to Steph and mentioned what makes them different. Rose leans over to Steph’s side and calls LeBron a physical specimen whereas Curry’s relatable attributes make him more influential.

Moving on, as Jalen said, Steph may even be the leader of the new school. For example, he did the “Night Night” celebration after scoring in the NBA finals this year. That particular celebration took the world by storm as many athletes around the world did the same. One of them was football star Neymar Jr, who imitated Steph.

Moreover, what he won this year, the ring and the Finals MVP truly makes him one of the most influential players. Adding on, Curry stepped up for his team when they needed him the most. And that is one of the reasons why he will go down as one of the greatest players in the NBA.