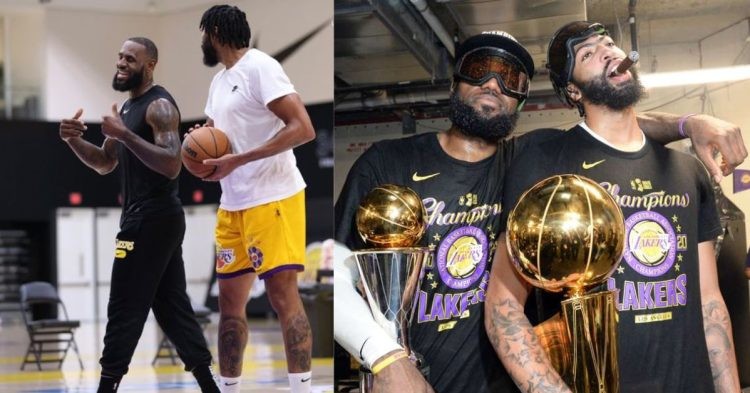 The Los Angeles Lakers had a very disappointing NBA season. LeBron James, Anthony Davis, and Russell Westbrook finished the season with a disappointing record of 33 wins and 48 losses. Additionally, AD and LeBron were both injured for stretches of the season. They have both returned to training with well over a month for the NBA season to begin.

It is important to understand what went wrong for them last time. By doing so, they will be able to work on their weaknesses and flaws. Here is what the Los Angeles stars should be working on.

LeBron James and Anthony Davis should work on their free throws

King James is entering Year 20 in the NBA. However, he is showing no signs of slowing down as he becomes 38 years old. LeBron was seen at several Pro-Am games this NBA offseason. He played alongside other NBA players such as Demar Derozan and Dejounte Murray.

This is quite exceptional. Not many NBA veterans love the game enough to publicly display their skills outside the league. LeBron is still the face of the NBA and participates in these games. James seems to have slimmed down in the photo of him working out with Davis. Be that as it may, if he had to work on an aspect of his game, it should be his free throw shooting.

LeBron James has shot 73% from the free throw line throughout his career. This is a poor percentage for a professional basketball player. He is fouled several times in a game. But, does not convert most of the free throws awarded and leaves points on the table.

Anthony Davis has the exact same problem. He is a career 79% free throw shooter. However, he just had one of his worst years from the free throw line, shooting only 71% of them this year. AD should be working on his shot in order to maximize his effectiveness for his team.

Additionally, Davis should also work on his conditioning. He has developed a notorious reputation to be injury prone over the past couple of seasons. If both these Laker stars are able to get on the same page with Russell Westbrook and Patrick Beverley, this is a sign of good things to come.