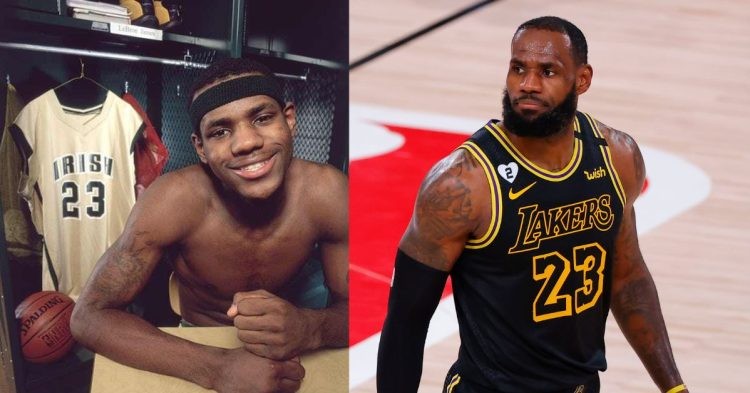 LeBron James as a teenager and now (Credit- Twitter)

LeBron James was born in Akron, Cleveland, and has been with three NBA teams in his career. The Cleveland Cavaliers, Miami Heat, and Los Angeles Lakers. He has spent almost 2 decades in the league and is still a force to be reckoned with.

One must wonder where the King came from, what his story is, and how it all began. However, there are a lot of scattered stories everywhere that are difficult to piece together. It is important to know how his journey started to understand how far he has come.

Not many people know the whole backstory to LeBron. He was born on December 30th, 1984 to Gloria Marie James. His mother is a common and notable presence in his life. However, not many people know about the King’s father Anthony McClelland. This is because Anthony had a criminal record for several crimes and was not involved in his family’s life.

As an inevitable result, James grew up in a single-parent household. It fell upon his mother, Gloria to raise her son into a man in society. She struggled to do so and they switched houses or stayed with people they knew. Therefore, LeBron has started from the very bottom in every sense of the term.

The 4x NBA champion began playing organized basketball in 5th grade. He also played in the Amateur Athletic Union (AAU). This was where his talents began to emerge as he grew at an astounding rate and began to understand his own potential.

LeBron James’ journey to getting drafted by the NBA

LeBron hit the radar of the world during his time in high school, It was called St Vincents St Marys High school. The basketball team was relatively unheard of before James got there. However, he was dominant and seemed unstoppable against other high school basketball players.

He averaged 21 points and 6 rebounds during his time in high school. Additionally, his team event went 27-0 during a stretch to a division 3 tournament. This speaks to how well they did as soon as he joined them. His team nicknamed “The Fighting Irish” managed to repeat as state champions. Therefore, LeBron was also awarded his first of many titles, “Ohio Mr. Basketball“.

The United States is crazy about displays of basketball, regardless of where it was coming from. As a result, King James soon fell into the sights of several scouts and analysts. They instantly compared him to the likes of Kobe Bryant and Michael Jordan simply because of his physical dominance and greatness. He was chosen first in the 2003 NBA draft by his hometown team, the Cleveland Cavaliers

The Chosen One was soon put into the NBA world with his home team. There, he instantly showed signs of greatness and potential from the start. He averaged 20.9 points, 5.5 rebounds, and 5.5 assists per game. He shot an efficient 41% from the field. However, he shot only 29% from the three-point line and 75% from the free-throw line. Therefore, James’ game was still far from developed.

His performance earned him the “Rookie of the Year” award. However, his team did for fare well and missed making the playoffs that season. They finished with a record of 35 wins and 47 losses.

LeBron struggled to get his team to the Finals

King James took a few years and tried to carry the Cleveland Cavaliers to an NBA Finals. His journey through the eastern conference was usually a “dog fight“. This was because, either the Detroit Pistons, Boston Celtics, or some other eastern powerhouse would crush his team. It was near impossible to lead a team as a sole superstar through a conference to make the NBA Finals, let alone win it.

In all fairness, the King did manage to lead the Cavs to the NBA Finals in 2007. They had to eliminate Paul Pierce, Kevin Garnett, and the Boston Celtics in 7 games to do so. However, they were swept by the San Antonio Spurs and lost the finals in 4 games. As a result, Tony Parker, Tim Duncan, and Manu Ginobili won the 2007 championship.

LeBron James soon realized that it was simply not possible to win with the players he had around him. Therefore, he decided to leave the Cavs and join the Miami Hear. There he was paired with Dwayne Wade, Chris Bosch, and other reliable roleplayers. They managed to win back-to-back NBA championships in 2012 and 2013 as a result.

The Chosen one soon decided to return back to Cleveland and try to deliver on his promise to bring them an NBA title. The Cavo made the NBA Finals in 2015. However, Bron’s teammate Kyrie Irving was injured and missed the majority of the finals they lost in 6 games to Stephen Curry and the Golden State Warriors.

In 2016, LeBron and Kyrie managed to win the title for Cleveland. Moreover, they did so after being down 3-1 to the Warriors in the finals. This has led several people to call it one of the greatest, if not the greatest, NBA titles of all time.