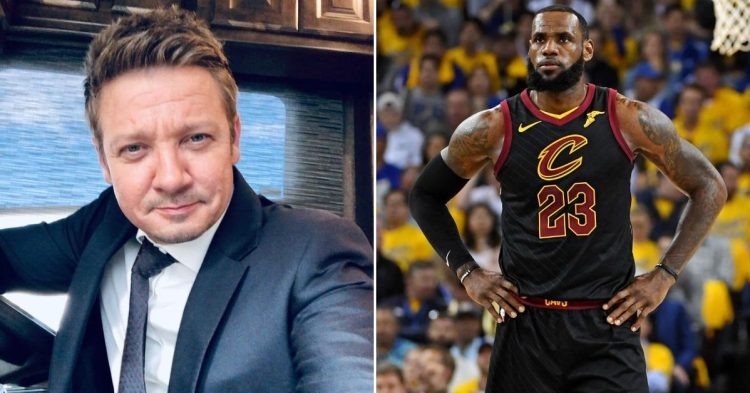 Jeremy Renner has faced an unfortunate accident recently. For those who don’t know, Renner suffered a snowplow accident on January 1. He was hit with fatal injuries but is currently making good progress in the intensive care unit. The Marvel actor doesn’t have much to do with the NBA and the sport of basketball, but there has been one instance in the past that caught our eye.

In 2018, Renner spoke about 4x NBA champ LeBron James after Game 1 of the NBA Finals. The Cleveland Cavaliers played against the Golden State Warriors that year, which the Dubs won.

What did Jeremy Renner say about LeBron James?

Renner said in an interview after the game, “There is more drama in that court than in most movies. I think he’s really trying to be an actor anyway so he’s just making plays to be on the big screen.” NBA fans would not have forgotten that game, especially Cavs fans.

For context, King James put in one of his best performances on the night. He made an enormous 51 points, along with 8 rebounds and assists each. Despite this, the Cavs lost to the Warriors on the night. Many would point the finger at then-Cavs player J.R. Smith.

George Hill missed his free throw, and Smith caught the rebound. Many would expect him to go for a layup when he was that close to the rim, but Smith dribbled away, with the ball. He later said, “I was trying to get enough to bring it out to get a shot off.”

It was a huge effort from James, which was to no avail in the end. Had the Cavs won that game, it might have been a whole different story at the end of the NBA Finals, mainly because of how Game 1s help the winning team build momentum.

Renner believed at the time that James was attempting to get into Hollywood. It is no secret that the NBA icon has been heavily involved in the industry. He has appeared in various movies, including The Simpsons, Space Jam 2, Smallfoot, and many more. As Renner claims, perhaps LeBron was aiming for a bigger role at the time.

After that night, LeBron went to the NBA Finals again in 2020 with the Los Angeles Lakers. He helped the team win the title after beating his former team, the Miami Heat, in the finals as the series ended 4-2.