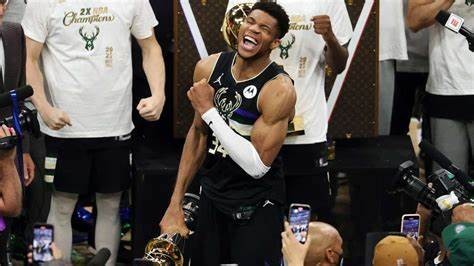 The NBA Trophy will now travel to Milwaukee. The Milwaukee Bucks put up a stellar performance to defeat the Phoenix Suns in six games and win their first NBA trophy in 50 years. The team never game up and overcame a 2-0 deficit to win the series in just six games. Giannis Antetokounmpo was the star for the Bucks this series. In game 6 he put up 50 points, 14 rebounds and 2 assists. He had a lot of support from Jrue Holiday who put up 12 points, 9 rebounds, and 11 assists. The NBA world was thrilled that the Bucks took home a championship.

NBA Players from around the league took to social media to congratulate the Greek Freak and the Milwaukee Bucks. King James was all in for his friend Chris Paul to win the NBA Finals.  However, that did not hold him back from telling the young Giannis how much he deserved the ring and the NBA Finals MVP award.

Dwayne Wade and Isiah Thomas also took to twitter to show their love for the Milwaukee Bucks.

Congrats to the @Bucks on winning the NBA championship!!! Hell of a season 🏁

Kevin Durant had his 2021 playoff run cut short by the Milwaukee Bucks. But KD is a man of great sportsmanship and He made sure to show his respect for the Bucks franchise and their fans.

Nothing but respect for the Milwaukee Bucks franchise, the city of Milwaukee and those loud ass fans. Incredible playoff run fellas!

Another player who had his run cut short by the Bucks this year was Trae Young. The young Atlanta Hawks point guard took the time to congratulate the Bucks on having a beautiful ending to an amazing playoff run.

Man, what a way to end the season.

The Golden State Warriors duo, Stephen Curry and Draymond Green know what it feels like to win a championship. They congratulated Giannis Antetokounmpo on his historic night.

So happy for Giannis and Milwaukee man…amazing to see what happens when you put your heart and your soul into something and stay genuine and true to yourself. Inspirational 🙏🏽

That was fun to watch‼️ Congrats to the Bucks🙏🏽💯

Giannis Antetokounmpo and the Milwaukee Bucks put up four straight wins to take home the 2021 NBA Championship. Not too many years ago, A young Giannis had won his MVP award. The Greek Freak looked up to Kobe Bryant.

The Mamba had challenged him to bring home a championship and Giannis delivered in style. Kobe Bryant might not be here right now to congratulate Giannis in person but wherever he is, he sure is proud and probably telling Giannis the next challenge is to go Back to Back. The former Lakers star, Pau Gasol took to Twitter to congratulate Giannis in a way that would honor the challenge that Kobe left for the Greek Freak.