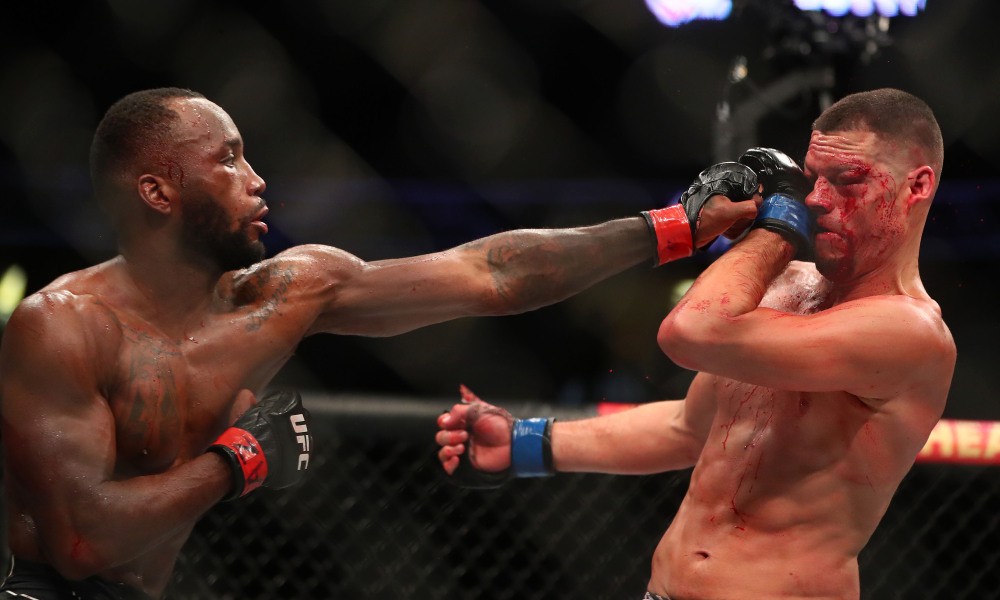 The two big egos finally faced each other inside the cage at UFC 263. Nate Diaz vs Leon Edwards was the first non-title, non-main event five-round fight in the UFC.

Both the athletes made their comebacks after a long break from the sport and the fight didn’t disappoint as well. Leon Edwards beat Nate Diaz by a unanimous decision victory.

The welterweight bout was part of the UFC 263 main card at Gila River Arena in Glendale, Ariz. It aired on ESPN following early prelims on ESPN+ and ahead of the main card on pay-per-view. Ewards largely dominated the fight but didn’t seal his victory until a late scare.

In the first two rounds, Edwards focused on his boxing skills to take Diaz by surprise, he also gave few ferocious calf kicks which bothered Diaz throughout the fight, making his ground movements a bit slow.

Nates a G and hiding the pain well, but his leg is obviously done! 5 rounds seems like a long way away for staying mobile. #UFC263

Those leg kicks are key for Edwards #UFC263

In the early round, Edwards throws a brutal elbow that sliced Diaz’s right side of the head. The cut was not the first one but it was definitely the biggest one for The Slugger, as he dealt with multiple lacerations. A physician was called for Diaz in between rounds to examine the cut and highlight any danger. After a brief look, the match was then resumed at the physician’s command.

Diaz’s infamous showmanship surfaced early in the fight. Diaz turned his back toward Edwards, put his hands up to signal, “Come on,” and even flipped the bird. Diaz was running his mouth and taunts all the way to the end but Edwards was just focused to inflict more damage.

In rounds 3 and 4, the gap between the two fighters was more widened in terms of scores and damage inflicted. Edwards hit him with the stunning overhand left which Diaz found difficult to answer back at his opponent.

In the last round, Diaz summoned all of his remaining strength and landed a hard punch that made Edwards wobble on his feet. Diaz chased and stunned Edwards around the cage and landed more shots, as the clock runs out. Despite the damage he suffered and being visibly hurt, Edwards survived long enough for the final bell. Diaz had late success, but the first four rounds earned Edwards the decision win.

Locks in his 1️⃣0️⃣th straight win!

💢 @Leon_EdwardsMMA got the job done after going the distance. #UFC263 pic.twitter.com/bP9b1AVAWn

Edwards win at UFC 263 makes it his 10th win in a row and keeping his winning streak alive which means he hasn’t lost a single fight since 2016. His last loss came from Kamaru Usman back in December 2015. Nate Diaz was making his return after a 19 months hiatus from the cage.

They should make Diaz vs Diaz #moneyfight

Prior to UFC 263, UFC president Dana White said the winner of Edwards vs. Diaz will be next in line for the winner of welterweight champion Kamaru Usman’s title rematch against rival Colby Covington, which is expected for later this year.