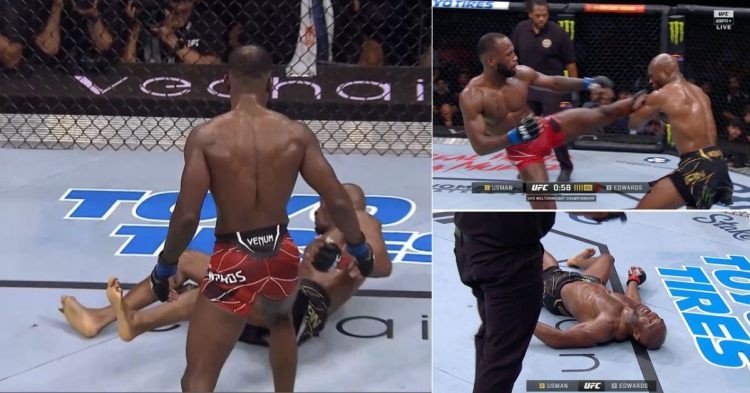 Leon Edwards knocked Kamaru Usman out cold in the closing moments of the fifth round to become the undisputed welterweight champion. Edwards is now the first-ever Jamaican-born UFC champion.

However, what followed was arguably one of the most coldest moments in the history of UFC. Usman, who has been knocked down just once in his UFC career, against Gilbert Burns, suffered the first knockout loss of his MMA career.

Kamaru Usman took on Leon Edwards in his sixth title defense of the UFC’s welterweight championship. Going against a very lethal striker in the form of Leon Edwards, little did we know that Edwards would become the first fighter to earn a takedown against Kamaru Usman.

STRUT IT OUT @LEON_EDWARDSMMA YOU JUST DID THAT! #UFC278 pic.twitter.com/SzNt89ux73

While some might argue Colby Covington is the first fighter after he almost got Usman’s back during their encounter back at UFC 268, it was not registered by the UFC. This time around though, the story was entirely different as Leon Edwards earned a clean takedown against Kamaru Usman, even getting a mount position against the welterweight champion.

Despite a lackluster start in the first round to his title defense against Leon Edwards, Kamaru Usman bounced back stronger in the remainder of the fight and showed just why he will go down as one of the greatest mixed martial artists of all time.

Barring the first round, Edwards looked completely clueless against Kamaru Usman who seemed better both on the feet and on the ground. However, it’s not over until it’s over. And that’s what happened as Leon Edwards slept Kamaru Usman in what will be a highlight reel for the ages.