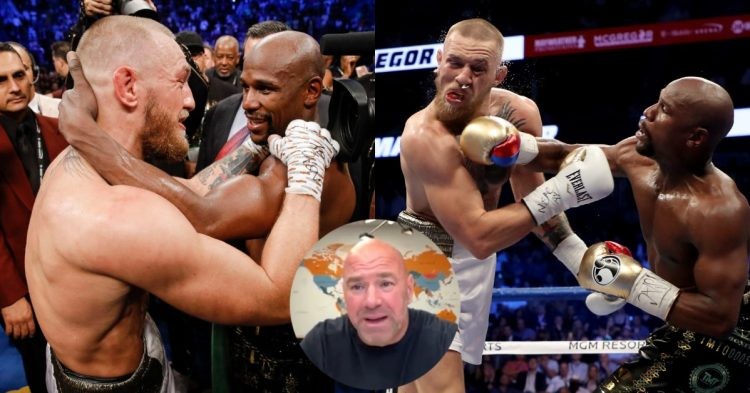 Former UFC double champion Conor McGregor wanted a rematch against Floyd Mayweather. According to a report from FIGHTHYPE, the two were in the negotiations to share a boxing ring for the second time. The report also stated that the fight purse for the competitors could touch the magical Billion dollar mark. But the UFC President Dana White has no interest in making the fight.

Conor McGregor fought Floyd Mayweather in 2017, which turned out to be the second biggest Pay Per View (PPV) seller of all time. With over 4.3 million PPVs sold and over $600 million in revenue, it is a no-brainer for either fighter to earn a payday. The Notorious One has been pushing for the fight and in a now-deleted Instagram post, he posted a photo of their previous encounter and wrote, “I accept.”

Although Floyd has the luxury to pick and choose whoever he wants to fight, Conor McGregor is contracted to the UFC. Hence, every fight that Conor finds himself in, has to be pre-approved by the promotion. So for the fans to witness the rematch, UFC and Dana White have to give their stamp of approval. But it seems like White wants no part of it. In an interview with TMZ, He said,

“I have less than zero interest in seeing that again,” Dana said during the interview. He was then asked about Michael Chandler being a possible contender for the Conor fight. In response to that, Dana added, “Yeah, I like that fight.”

Although he has slammed the door shut on Conor McGregor vs Floyd Mayweather 2, Dana White is very much interested in seeing Conor fight. As a matter of fact, he stated that Conor vs Michael Chandler would make sense for McGregor’s next fight. With the Irishman set to come back late in 2022 or very early in 2023, White’s comments on the matter hold a lot of weight.

Michael Chandler also did his bit to make the fight a possibility. He knocked out Tony Ferguson at UFC 274 and made a passionate call out to Conor McGregor. It created a lot of Buzz and even the man himself responded positively.

The bout between Conor and Chandler makes a lot of sense for all the parties involved. While it will be a big money maker for the UFC and Michael Chandler, Conor McGregor will get to fight someone ranked in the Top 5 of the lightweight division. While there were rumours of McGregor fighting Charles Oliveira for the vacant title, it seems like the UFC went on a different way.

But the Michael Chandler fight is not a bad one in terms of entertainment factor either. With two powerful strikers going at it inside the Octagon, it will surely make for one enthralling contest.

“The Dream Is Over for This Year,”- Matteo Berrettini Pulls Out of Wimbledon After Testing Positive for COVID