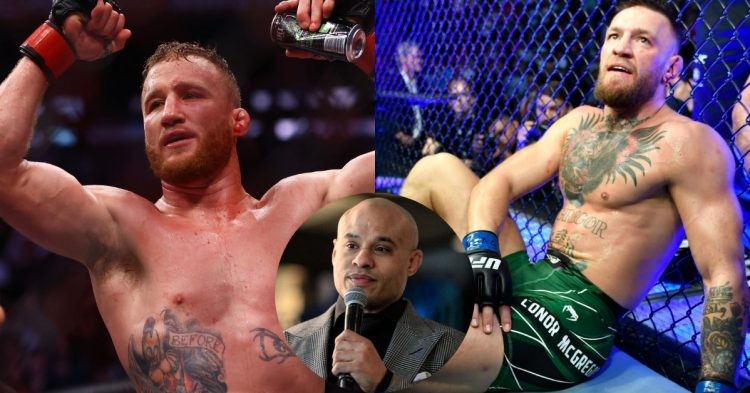 Two weeks ago after knocking out Rafael Dos Anjos, Rafael Fiziev called out Justin Gaethje for a fight in the post-fight press conference. Consequently, in a recently concluded interview with The Highlight’s manager Ali Abdelaziz, The Schmo asked him for his thoughts on a possible matchup of Gaethje against Fiziev.

Ali was not against the idea of this matchup but suggested a different opponent for The Highlight. He wanted Gaethje to fight Conor McGregor once he returns and while doing that he also expressed his desire that Justin should end the Irishman’s UFC career.

“Listen I would like to see Justin Gaethje conquer Conor McGregor one more time. He’s been conquered by so many people, let’s finish this guy. Let’s kick this guy out of the sport. Have somebody smash him and get him out of the sport.”

Both Ali Abdelaziz and Conor McGregor share a bad relationship and have always spoken ill about each other. Therefore the manager’s comments on the Irishman in Schmo’s interview are just one of the many harsh digs that he has made.

However, fans will like Ali’s suggestion of wanting Gaethje and McGregor to collide inside the octagon because of their striking skills and aggressive fighting style.

But it would actually look bad for the Notorious’ legacy if he suffered a loss in his comeback as it would mean that he has failed to register a single win in his last three matchups.

Are there any possibilities for a fight between Justin Gaethje and Conor McGregor?

Justin Gaethje last fought against Charles Oliveira for the vacant lightweight title in May 2022 at the UFC 274 PPV. The Highlight suffered a brutal submission loss and failed to become the champion in his second attempt.

After this loss, Gaethje announced that he will be out of action for several months as he prepares for a nose surgery that is troubling him for a decade now. The former interim champion is currently undergoing through rehab and is expecting to make a comeback at the end of this year or in early 2023.

So there is a high chance that we could see Justin Gaethje go against Conor McGregor in his comeback fight. Because The Notorious who suffered a leg injury last year has almost recovered from that injury and has started training.

It will take a few months before he can start training leg kicks and hence McGregor has to wait till the end of 2022. There are several contenders who have called out The Irishman. So it would be interesting to watch what the promotion has in store for both these lightweight fighters.