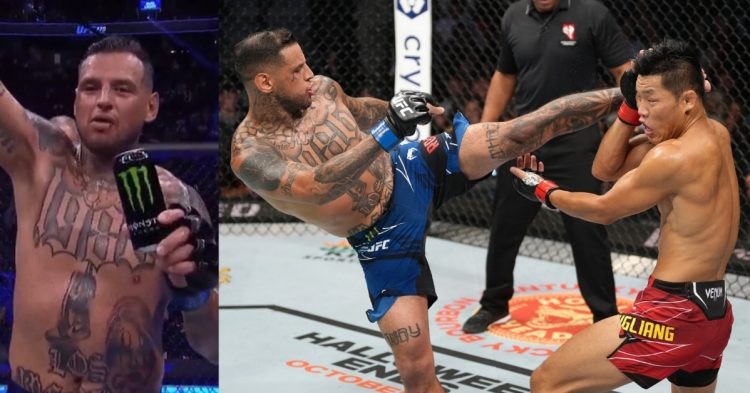 Li Jingliang and Daniel Rodriguez had a very chaotic last few days! While Li was originally booked to fight Tony Ferguson in the co-main event of the PPV, Daniel was preparing to take on Kevin Holland. But moments of madness during the weigh-ins saw the entire card turned upside down.

While Li beat Muslim Salikhov coming into the fight, Rodriguez won all 3 of the last fights. Jingliang had 11 wins in the UFC with 5 losses in his 16 fights. D-Rod, on the other hand, had 6 wins and 1 loss in his 7 fight run in the UFC. The bout was set to take place at a catchweight.

Both fighters had great skills on their feet. While Rodriguez was the more dynamic striker, Li was more well-rounded in terms of overall skills. Because of the last-minute nature of the fight, there was a lot of intrigues to see who made the better adjustments. So who came out victorious between Li Jingliang and Daniel Rodriguez? Let’s find out!

Neither fighter wasted any time in getting going. While Daniel Rodriguez landed the first strike of the night, Li Jingliang answered back with a few stiff leg kicks himself. It seemed like Li’s game plan was to land kicks to slow down Rodriguez and reap the benefits in the later rounds. As round 1 went on, the Chinese fighter seemed to find his groove.

The 34-year-old even dropped Rodriguez with a leg kick in the last minute of the opening round. Li seemed to be having fun inside the Octagon as he was even showboating at the beginning of round 2. Not only that, he was the one pushing the pace on Daniel and making D-Rod move backwards constantly. Although Rodriguez was trying his best to land a big strike, Jingliang was too good for him.

In the closing minute of the second round, The Leech landed a massive hook which seemingly rocked Daniel momentarily. Out of desperation, Rodriguez aimed for a head kick which was caught by Li. Grabbing hold of the leg, Li easily took Daniel down to close out the second round.

Jingliang was in spectacular shape ahead of the fight and it really seemed to pay off. He looked fresher than ever at the beginning of round 3. His footwork was on point and he was landing strikes at will. Rodriguez was too dependent on his punches instead of mixing up his striking with good kicks. Li comfortably outworked Daniel on the night.

But, to everyone’s surprise, Rodriguez got the win via split decision. Two judges scored the fight 29-28 for D-Rod and one judge had it 28-29 for Li Jingliang. Li’s striking was more dynamic and he seemed to have Daniel in trouble multiple times throughout the fight. However, the judges did not see it that way.

In round 3, Li landed 27 significant strikes and Daniel landed 34. Even in the final round, Li was doing excellent work on the feet. So the decision certainly comes as a shock to the fans. But it probably shouldn’t as D-Rod landed a total of 88 significant strikes as opposed to 78 from Jingliang.

The reaction online seems to indicate that the fans think Li Jingliang got robbed against Daniel Rodriguez at UFC 279.

First he doesn’t get to wear his new suit or show off his newly learned English. Then he accepts a fight against a heavier opponent, delivers in front of a booing crowd, and that’s the decision? THAT is how his week ends? We don’t deserve Li Jingliang.

Li Jingliang gets robbed by by judges. #UFC279 pic.twitter.com/mIrExVkF97

li jingliang backstage after his press conference got cancelled, he had to switch opponent to someone 10lbs bigger and got robbed in the fight all within 3 days pic.twitter.com/d6wlGXgvmM

What are your thoughts on the fight? Do you think Li Jingliang was robbed? Let us know in the comments down below.

“One of the Scariest Fighters in the world”- Khamzat Chimaev Ragdolls Kevin Holland, Chokes Him Out With a D’arce in Round 1 at UFC 279