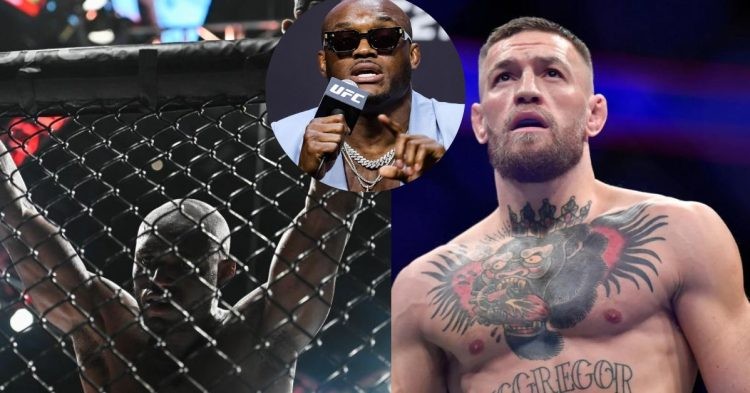 Former P4P No.1 and welterweight champ Kamaru Usman is in a tough place right now after his first UFC loss. Usman was on his way to make his sixth title defense of his welterweight title until Leon Edwards pulled a highlight-leg kick from nowhere to shock the world.

Conor McGregor, his long time rival was quick to ridicule Usman for his knockout loss to Edwards at UFC 278. Shortly after the fight, he took on Twitter to bring up the fact that no fighter should bring their family and especially children in their fights. The former two-division champ wrote:

“I feel this deep. I do not suggest bringing family whatsoever. Especially the children. This is different fighting. I’ve done both sides of this and feel going to the mission solo is best. You can see family again post battle. Will definitely be continuing this way going forward.”

I feel this deep. I do not suggest bringing family whatsoever. Especially the children. This is different fighting. I’ve done both sides of this and feel going to the mission solo is best. You can see family again post battle. Will definitely be continuing this way going forward. https://t.co/Ve71l4KeN5

In an episode of The Joe Rogan Experience, Usman addressed McGregor’s comments and stated that it was very low of Conor to make those remarks.

“When my daughter was crying, that one, it got to me. I didn’t like seeing that. And then, Conor tweeted something and it was kinda blasting me about for like bringing her to the fight. Like he tweeted some mean things, and it was like how low of people sometimes.”

Kamaru claimed that his daughter Samirah needs to learn important lessons from him and thus need to witness all the highs and lows. Following the aftermath of Usman’s vicious KO loss, a video was surfaced where Usman’s daughter was seen bawling in agony after seeing her father get knocked out.

‘The Nigerian Nightmare’ thinks that he is blessed right to get the opportunity to show his daughter the way of life and all the aspects of it, not just the success part.

Kamaru Usman Talks About His Rivalry With Conor McGregor

Kamaru Usman slammed Conor McGregor for his comments in the aftermath of his loss at UFC 278. Shortly after the main event, McGregor took to his social media to ridicule the Nigerian by posting a tweet mocking Usman after his loss.

“Usman gonna come out saying he from Pluto after that smack hahah Marty green pants from Pluto.”

In the same episode with Joe Rogan, the former welterweight champ addressed the harsh comments made by McGregor. He said:

“Even when he broke his leg, I didn’t kick him when he was down.”

Kamaru is all about sportsmanship and he has dealt with his brutal loss well. McGregor on the other hand, has been very active on social media and often seen taking jives at every fighter from any division.

However, it is unlikely to see that they will face each other in the octagon as Usman already gave him an opportunity before McGregor’s fight with Poirier but Conor refused. Usman added:

“That’s a very tough injury. I almost felt for him. I almost wanted to send him a message and say, ‘Hey man, heal up, you’ll be back’. That’s just kind of who I am. This is a sport. It’s a f***ing sport,”

Usman will look to bounce back soon and possibly face Edwards for a trilogy fight at some point next month. Meanwhile, McGregor is also hoping to make a successful comeback next year after his losses and a broken leg.