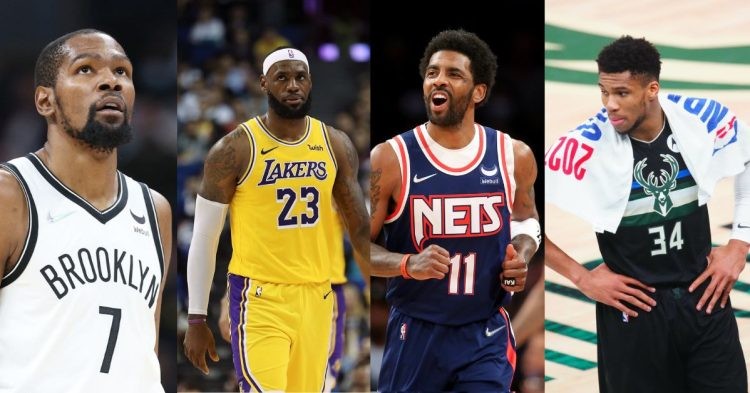 Nike has been one of the biggest brands in the world for decades. Apart from basketball, they have their name carved into the rocks of greatness for so many other sports. The sports giant has collaborated with many NBA stars to create signature shoes for them.

The most common name we all know is Jordan. In 1984, Michael Jordan and Nike worked together to create a signature shoe for the player. Ever since they have created the best line of shoes in the game for the entire world. Apart from the GOAT himself, have a look at the other NBA players that have signature shoe deals with Nike.

Who has the most signature shoes with Nike?

LeBron James boasts the most signature shoes with Nike. He has been one of the brand’s longest partners since he signed a deal with them in 2003. This was when he was drafted as the No.1 pick by the Cavs.

When he was 18 years old, LeBron signed a deal with Nike that was worth $90m. However, he earned himself a lifetime contract with them after dominating the league for almost two decades.


The only other player that comes close to LeBron’s number is Kevin Durant with 15. Nike managed to get KD’s signature for a $60m deal in 2007. It was the biggest rookie endorsement agreement at that time after LeBron James. Durant released his first ever signature shoe; KD 1, in 2007.

Adding on, Giannis Antetokounmpo is also one of the players on Nike’s star list. He signed with Nike in 2017 and released his debut signature shoe, the Zoom Freak 1, in 2019. He went on to release the Zoom Freak 3 in July of 2021. The renowned sneakerhead P.J. Tucker introduced the shoes to the world during Game 4 of the Eastern Conference Finals between the Milwaukee Bucks and Atlanta Hawks.

The star list also contains Kyrie Irving‘s name. He has collaborated with Nike for 8 signature shoes to date. However, there have been rumors that Kyrie’s partnership with Nike will end this year. Like the Brooklyn Nets star, Paul George also has a signature shoe line with the American brand. He has partnered up with them to release six of his signature shoes; the PGs.

NBA Star Miles Bridges Runs Away After Alleged Physical Altercation With a Woman; Returns Back to Turn Himself In