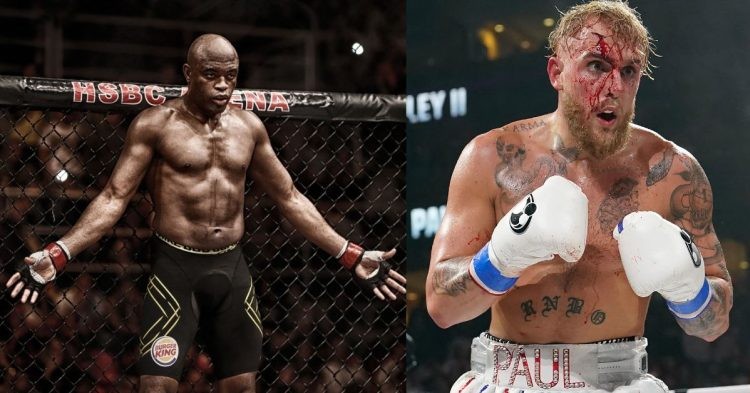 YouTuber turned professional boxer Jake Paul is getting ready to face one of the greatest MMA fighters of all time Anderson Silva on October 29th in Phoenix, Arizona. Going into the biggest fight of his career, Jake Paul till now has earned a 5-0 record in his pretty young Boxing career with notable wins over former UFC welterweight champion Tyron Woodley(twice) and former One FC champion Ben Askren.

Fighting Anderson Silva is by far the biggest challenge Jake will face inside the boxing ring. Now, in a recent episode of the ImPaulsive podcast, Jake’s elder brother Logan Paul has shared his opinions on how the fight could go. Logan said “Anderson Silva is a very good boxer,” He continued. “He beat Julio Cesar Chavez Jr, he beat Tito Ortiz and Vitor Belfort [in his UFC run], so he is not to be taken lightly. Even though he’s 47 years old – it’s a respect thing – I’m worried, he’s a southpaw who has timing, technique, accuracy, and skill.

“Just so you guys know, I asked Jake how he’s feeling: Uber confident. Very confident, I’m done doubting Jake. I know he’s going to win but I know it’s going to be a hard fight. I think it’s going to go all eight rounds, I’m getting flashbacks to Jake Paul vs Tyron Woodley 1, that went all eight rounds and Tyron is not nearly as good as Anderson Silva.”

Worth mentioning that Paul vs Woodley 1 wasn’t the most entertaining fight to witness. With both fighters hesitating to open up and failing to capitalize on crucial moments.

Remembering Silva’s highlights as the UFC Middleweight champion and the skills he possesses as a striker, it wouldn’t be surprising if he gets the job done early and becomes the first man to finish Jake Paul. As for Jake he will have to display his absolute best to challenge Silva.

Although Jake Paul has never fought a professional boxer and has just been training in boxing for a couple of years, you still can’t underestimate his boxing abilities. Yes, Ben Askren was never known for his striking, and Woodley hadn’t won a single fight in years and was cut from the UFC but still at one point in time they were the best fighters in their division and Jake Paul Knocked them out.

People like Joe Rogan have time to time appreciated Jake’s skills and acknowledged the power he possesses in his hands. In one of his podcasts, he said “That guy can f**king crack, you do not wanna get hit by him, he can f**k people up, that’s real, you can hate on him all you want but you better recognize that he can f**k people up for real.” If Jake can pull of a massive upset by defeating Silva on October 29th he will finally get his long-due respect from fight fans around the world.