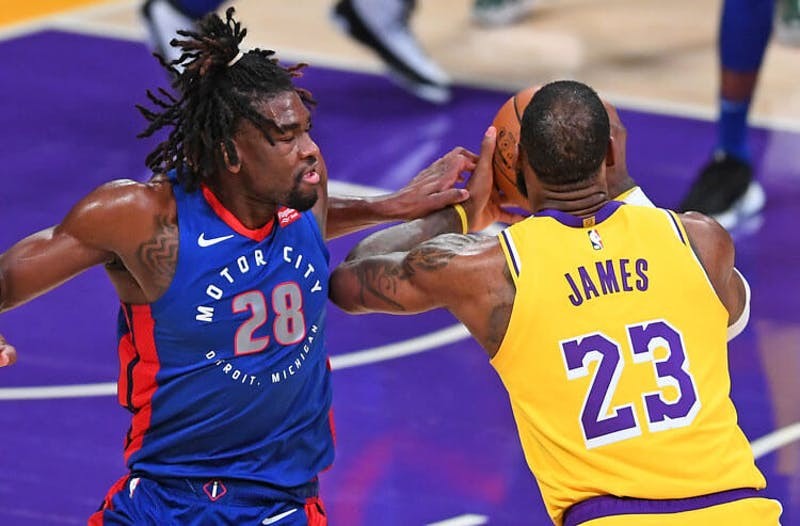 The Los Angeles Lakers and Detroit Pistons face each other in their second matchup of the 2021-22 season. In their last game, the Lake Show edged out Detroit but all headlines focused on the brawl between Lebron James and Isaiah Stewart.

The 2021-22 season has been a roller coaster ride for the Los Angeles Lakers. With LeBron James being injured, the new additions to the Lake show have struggled to score and win games. The Lakers are a lowly 24th in scoring margin. They have also failed to dominate on the defensive end as they are the 23rd ranked defence in the league.

AD only needs one hand ???? pic.twitter.com/wuwcG7QD3r

Even with injuries and suspensions, LeBron James is the most important player for the Lakers. He is averaging 25.1 points, 5.2 rebounds and 6.6 assists and will want to win his fifth championship.

After winning the 2021 NBA lottery, Detroit Pistons added another crucial piece to their rebuilding. The team has equally struggled with a record of four wins and 15 losses. The Pistons’ struggles have been evident in their last game as they failed to score even 100 hundred points against the Clippers.

They scored only 40 points and allowed 64 in the opening 24 minutes and shot miserably from the floor (36.7%). Detroit also recorded nine fewer assists than the Clippers (26-17). This season, Jerami Grant has led the Pistons on the court alongside Cade Cunningham. Both players have emerged as major positives for the team.

The Los Angeles Lakers are the favourites to win this game. But the Lake Show needs to be aware of the fact that they need to dominate from the tip-off. But with a more experienced squad, LA is the favourite to get the victory.

How to watch Los Angeles Lakers vs  Detroit Pistons?

The match between the Los Angeles Lakers and Detroit Pistons will be televised locally by Bally Sports Detroit and Spectrum Sports Network will be Local broadcasters for the game. International fans can catch live action online with an NBA League Pass subscription.