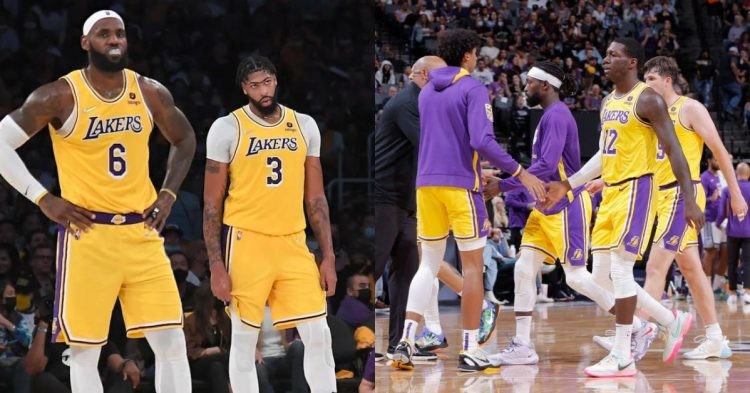 LeBron James failed to lead the Los Angeles Lakers into the NBA playoffs last season. The team finished the season recording only 33 wins and 49 losses. That will simply not cut it in the competitive Western Conference. As a result, they failed to qualify for the play-in tournament.

In order to prevent the same mistakes from happening again, the franchise has made changes to both its roster and management. We know they have fired former coach Frank Voguel and replaced him with Darwin Ham. Additionally, they have also traded for other role players in order to fix some of their weaknesses.

With that being said, one should wonder what the roster will look like for the 2022-2023 NBA season. Coach Ham will be tested and made to decide the best possible starting lineup with the players he has.

The Lakers made a lot of moves this NBA off-season. However, they are yet to address the elephant in the room. We all know that Westbrook was scrutinized greatly for his bad play last season. In fact, he was nicknamed “Westbrick” for his constantly missing shots.

It seemed that the Lakers were looking for other options at the guard position this offseason. They signed Patrick Beverley and Dennis Schroder to the roster. With the addition of Kendrick Nunn, who was injured and did not play last season, LA now has more than 3 point guards on the roster. Here is a list of what the lineup could look like.

LeBron James and Anthony Davis will be on the court as starters when healthy. Austin Reaves, Kendrick Nunn, Patrick Beverley, Dennis Schroder, and Russell Westbrook will have to divide the minutes between themselves. Nunn, who was a part of the Lakers but did not play last season has shown flashes of star-level talent. However, at the end of the day, it will be Darwin Ham’s decision based on the context and situation.

The Lakers also signed Juan Tuscando Anderson from the Golden State Warriors this offseason. He is also expected to be a part of the rotation. Finally, it is unclear if Anthony Davis plans to play the center position. If he does not, Los Angeles also has Thomas Bryant and Damian Jones to play that position.

We will find out more when the Los Angeles Lakers matchup against the Golden State Warriors when the NBA season starts.