“Lost an Amazing Grappling Match”- Kevin Holland Takes a Cheeky Dig at Khamzat Chimaev after his UFC 279 loss, Calls Out Stephen Thompson For His Next Fight 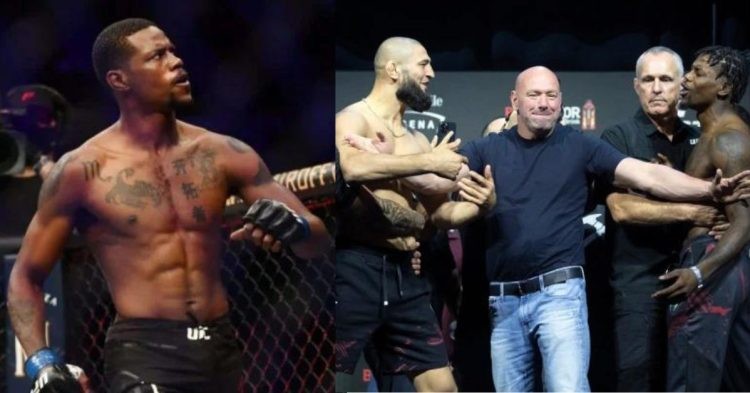 Kevin Holland has lost to Khamzat Chimaev in the co-main event of UFC 279 and that too in a huge upset. He was dominated by Khamzat from the very start of the fight and at 2:13 of the first round he got choked out by Chimaev.

Holland had a chip on his shoulder because of the backstage brawls and trash talks with Khamzat leading up to the fight. However, Holland prefers to fight on feet more than on the ground and the way this fight played out, it was a bad night for him.

Recently Kevin posted a video on Instagram and talked about the fight and what’s next for him. He tagged Stephen ‘Wonderboy’ Thompson, Daniel Rodriguez, and the UFC. Holland took out his frustration and demanded a fight against a striker rather than someone who likes to grapple. Kevin said:

“Guys, I lost an amazing grappling match last night, I mean fight, my bad…Chimaev is one hell of an athlete. Still gonna be talking shit, ‘cause you know who I am. I hate ending the year like this.”

He still hopes to get a fighter for his next fight, someone with a striking-based fighting style. It is understandable why he is upset about ending this fight on a sad note.

Kevin Holland was originally scheduled to fight Daniel Rodriguez on the main card of UFC 279 before all the weight missing fiasco went down and that led to switching opponents on the main card.

This led to a major shakeup in the UFC 279 main card, as Chimaev was rescheduled against Holland in a catchweight bout. Earlier during the UFC presser on Thursday, both Chimaev and Holland were involved in a heated physical and verbal exchange backstage, which later became a big brawl after Team Diaz got involved.

From the very first round, Khamzat spent no time wasting and went straight for a takedown. ‘Borz’ took down Kevin seconds into the bout which lasted for less than three minutes.

Chimaev dominated Kevin for the next minute or so with his wrestling. At two minutes, 13 seconds of the first round, Chimaev submitted Holland to pick another win while taking zero strikes.

However, Kevin was visibly upset as he was humiliated on the ground and submitted after all the antics and drama. In the aforementioned post, he took a dig at what happened and suggested that he lost “an amazing grappling match last night.”

Following this loss, he is hoping to rebound and get a fight against a striking-based fighter while hoping to face his original opponent, Daniel Rodriguez or Stephen Thompson for his next fight.

“I Should Have Kept It Standing”- Tony Ferguson Regrets Listening to His Cornerman and Shooting a Takedown on Nate Diaz, Assures He Won’t Fire His Teammates