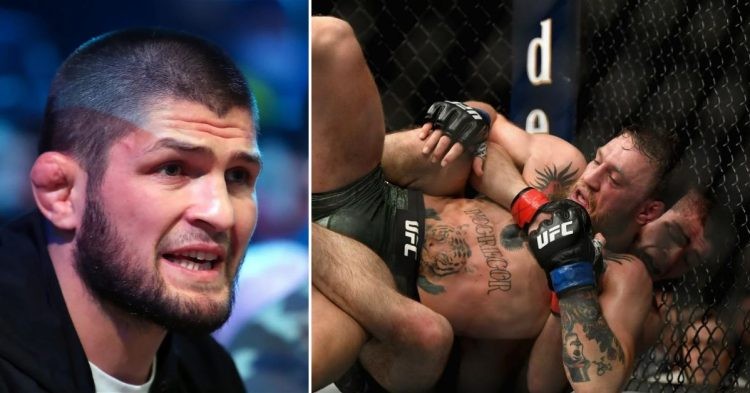 Khabib Nurmagomedov has emerged as one of the most respected and decorated mixed martial arts in the history of the sport. Nurmagomedov’s dominance inside the Octagon was a force to be reckoned with, and the undefeated 29-0 streak shall remain untouched for years to come.

Nurmagomedov’s biggest moment of his MMA career has to be his submission win over Conor McGregor. The Notorious and Khabib Nurmagomedov engaged in one of the most heated rivalries in the history of the sport.

After everything was said and done, it was the Dagestani fighter who emerged on top with a rear-naked choke to pick up the victory.

The win marked Nurmagomedov’s first title defense, and also McGregor’s first loss in the UFC’s lightweight division. It won’t be wrong to say that Khabib never misses a chance to talk about his incredible win over McGregor and that’s what happened recently when the former lightweight champion went to talk with the kids in Daniel Cormier’s wrestling class.

Fans criticize Khabib Nurmagomedov for his comments on Conor McGregor

A video has resurfaced online where Khabib Nurmagomedov can be seen having an interaction with the kids at Daniel Cormier’s wrestling academy. Nurmagomedov shares his thoughts on what would have happened if referee Herb Dean wasn’t there on the night he fought Conor McGregor back at UFC 229.

Fans in the comment section evidently showed their disdain for Nurmagomedov’s words in the comments section. While some opined he shouldn’t be talking like this to kids, others slammed the former lightweight champion for giving wrong lessons about sportsmanship to kids.

“This fight become bigger than our sport, bigger than MMA. Like all the time talking about this I don’t like but this is like one of the best moment ever happened in my professional career you know 2018, October 6th when I finish (Conor McGregor) this guy.” Nurmagomedov has admitted in the past.

Both Nurmagomedov and McGregor continue to share the rivalry and despite years into their UFC fight, they haven’t come to terms with each other. Nurmagomedov has taken jibes at McGregor in past, during his successive knockout losses to Dustin Poirier, while the Notorious recently remarked on Khabib Nurmagomedov’s Hall of Fame induction.