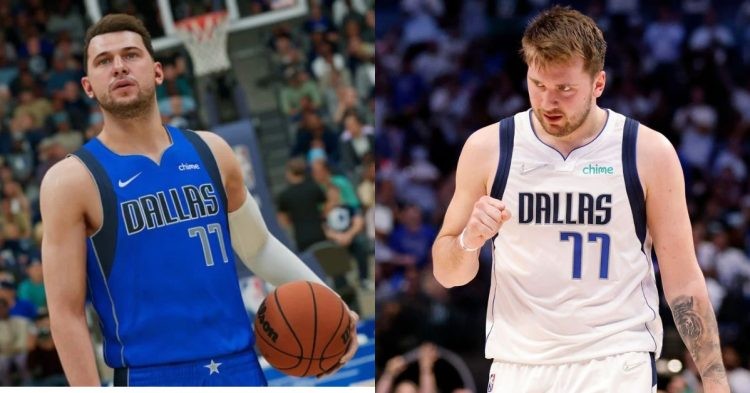 Many NBA experts agree that Luka Doncic from the Dallas Mavericks is one of the bright stars in the NBA. He is coming off his deepest trip into the NBA postseason. Doncic and the Mavs were eliminated by the eventual 2022 champions Golden State. Nonetheless, this is still the furthest we have seen him go.

One must wonder how the Maverics star has been rated on NBA 2K23. After all, it is common knowledge that the creators are quite strict with their ratings. Moreover, not a single player with the exception of Giannis Antetokounmpo has been rated more than 96. We should question whether Luka has been given a fair rating.

The Slovenian NBA star is rated just 2 points lesser than the Greek Freak. In all fairness, this is quite an accurate rating for what we saw from Luka during these NBA playoffs. This season, Doncic averaged 28.4 points, 9.1 rebounds, and 8.7 assists. Additionally, he has been shooting 45.7% from the field and 35.3% from the three-point line.

NBA2K23 knows Doncic possesses a high level of talent and play. Moreover, he is an international player and that comes with a certain appeal and fan base. It would be a very bad idea for the ratings to be low after he made it to the Western Conference Finals.

While a 95 OVR might look like the best, the game has several players at 96. That list includes Stephen Curry, LeBron James, Joel Embiid, and Kevin Durant. However, all these players are much older than Doncic and have NBA titles to their names. With the exception of Embiid.

Luka Doncic and the Mavericks eliminated the Utah Jazz despite having lesser star talent. While Doncic might be the only star for the Mavs, the Jazz had both Rudy Gobert and Donovan Mitchell. Dallas went on to face the defending conference champions, the Phoenix Suns. NBA analysts and journalists alike heavily favored the Suns over the Mavs.

Luka took the defending conference champions to work and ended up winning Game 7 at Phoenix. He ended up losing to Steph Curry and GSW in the next round.

Thus, the Mavericks star is technically ranked 3rd highest as there is a deadlock for the second position. We hope to see his OVR rise to greater heights in the upcoming years.