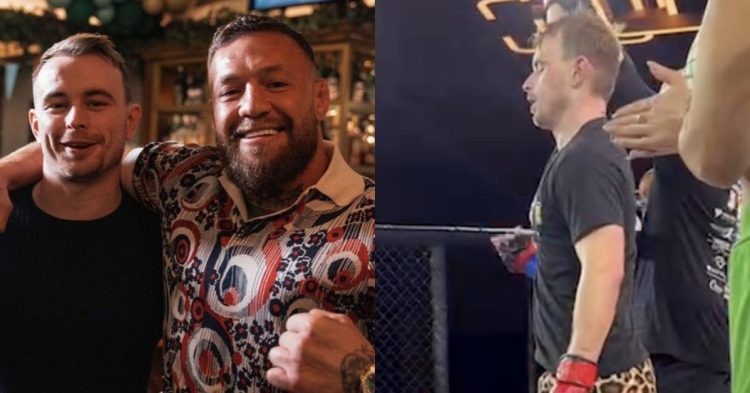 UFC megastar Conor McGregor is famous for his powerful left hand. He has put many of his opponents away with the piston of a left hand. But, fans can not underestimate Oscar Willis’ right hand either! Oscar made his MMA debut at Tuff-N-Uff on November 19th, in Las Vegas!

Primarily known for his journalistic skills, Oscar no longer wants to sit on the sidelines and watch the bouts unfold. He also wanted a piece of the action and stepped inside the cage. Not many MMA journalists can claim that they put on the gloves and competed in an actual bout. But, not only did Oscar Willis compete, but he also picked up a big win against Jeremiah Benavidez in an amateur bout.

As per amateur rulesets, the bout was set for 3 two-minute rounds. Like his employer Conor McGregor, Oscar also chose 155lbs as his weight class. However, it was evident that the ace interviewer is not ready for the big leagues and belongs at the amateur level. His opponent Jeremiah made it difficult for him at times, but Willis dropped Benavidez with a beautifully timed right hand. Oscar won the bout via unanimous decision.

What is the relationship between Oscar Willis and Conor McGregor?

For fans who are wondering who Oscar Willis is, he is the main reporter for Conor McGregor’s YouTube channel, The MacLife. MMA fans often see Willis interview some of the best fighters in the business for the channel.

He is extremely witty and his humorous style of conversation has become a must-see content for fans over the years. He especially shares a great bond with UFC lightweight fighter Dan Hooker.

Dana White revealed to Oscar for the first time that he is willing to book Khamzat Chimaev vs  Colby Covington next after UFC 279. Oscar also interviewed Conor McGregor in March earlier in the year, where the 34-year-old stated his wish to become the first-ever 3-division champ in the UFC. The former UFC champ also supported Oscar with a tweet ahead of his MMA debut.

The most impressive aspect of Oscar Willis’ MMA debut was his fight IQ. Although he got into a brawl at certain points in the fight, he showed great awareness and landed some well-timed takedowns.

At one point in the bout, Oscar put his opponent in a guillotine choke as well. He did not get a submission, but Oscar did not give up and kept his opponent pinned on the cage with great clinch work.

Fans were amazed by Oscar’s stunning performance. It is clear that he is just pursuing this strictly as a recreational activity, but he took it very seriously. He also seemed to have the time of his life while fighting.

Here are some fan reactions to Oscar’s debut MMA fight

@TheMacLife OSCAR WILLIS with the UD win. Great to see an MMA journalist get into the cage themselves. he’s about that life! #oscarwillis #themaclife 👨‍🎨🥖 pic.twitter.com/KPw1ZaEjzs

Oscar Willis aka the @TheMacLife guy WON HIS Fight Tonight at #TuffNUff via UNANIMOUS Decision!

But, Conor McGregor has not reacted to Oscar Willis’ first amateur win just yet. McGregor loves the Englishman and fans can expect The Notorious One to congratulate his employee in the coming days.