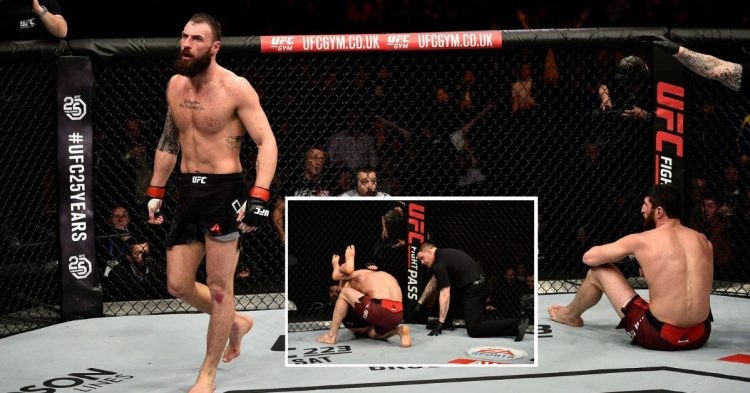 Magomed Ankalaev has emerged as a darkhorse in the UFC’s light-heavyweight division. Slowly and steadily, he has made his way to the top of the division and stands on the cusp of a title shot.

Ankalaev started his mixed martial arts journey back in January of 2014. He fought his first professional fight in Ukraine and fought predominantly in Russia before making his UFC debut. Ankalaev is on an impressive eight-fight win streak inside the UFC Octagon and will look to maintain his dominant run in the UFC’s light heavyweight division.

With just one loss in his mixed martial arts career, Ankalaev’s MMA record stands at an impressive 17-1 with 9 TKO/KO wins to his name. Today, let’s take a look at Ankalaev’s UFC debut, and to date the only fight he has tasted defeat.

Magomed Ankalaev made his UFC debut against Paul Craig back in March of 2018 at UFC London. He walked inside the Octagon with a perfect record of 9-0 and as a former WFCA Light Heavyweight Champion. However, little did he know that he would go on to suffer the first loss of his career against Paul Craig.

Going against a seasoned submission specialist in the form of Paul Craig, Magomed Ankalaev did incredibly well for the better part of the entire fight. He was not only able to dominate Craig on the feet but showed his incredible display of grappling as well.

Ankalaev was good everywhere and looked too tough and powerful for Paul Craig. However, as it turned out, in the closing moments of the final round, while being at the end of a brutal beatdown from Ankalaev, Craig was able to execute a nasty triangle choke, earning a tap from Magomedv at 4:59 seconds of the final round to pick up a submission victory.

Magomed Ankalaev suffered the biggest setback of his MMA career in his UFC debut, and to date, it is the only loss in Ankalaev’s MMA resume. Since then, Ankalaev has picked up eight straight wins to his name, earning decisive wins over the likes of Ion Cutelaba, Nikita Krylov, Volkan Oezdemir, and Thiago Santos among others.