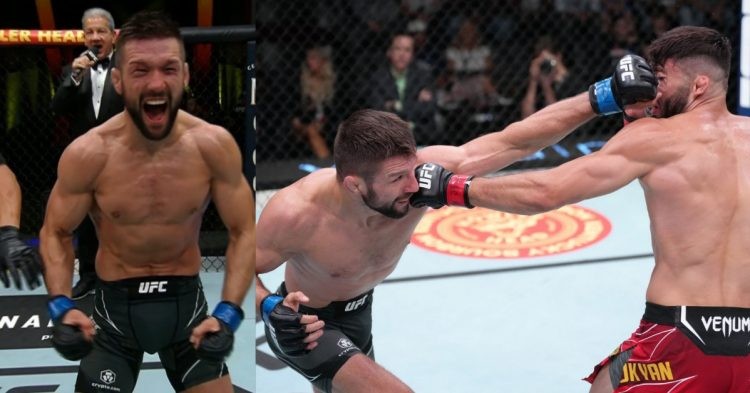 Mateusz Gamrot gets the win over Arman Tsarukyan at UFC Vegas 57. (Images via Twitter)

Arman Tsarukyan and Mateusz Gamrot fought in the main event of the UFC on ESPN 38. It was the biggest opportunity of both of their respective careers to make a lasting impression on the fans. Neither Tsarukyan nor Gamrot had ever been on the main event of a UFC card. The winner here will have a bright future in the division as lightweight is in desperate need of new talents at the top.

Nicknamed ‘Ahalkalakets,’ Arman Tsarukyan fights out of Khabarovsk, Russia. He had a UFC record of 5 wins and 1 loss. 155lbs title contender Islam Makhachev was the only fighter to beat Arman inside the Octagon so far. With two TKO finishes in his last two fights, Tsarukyan was on a 5 fight win streak since his loss to Makhachev in 2019. Hence, he was filled with confidence heading into the bout.

But Mateusz Gamrot was not to be underestimated either. Much like Tsarukyan, Mateusz had a hard time in his UFC debut fight. Although it was extremely close, he still lost to Guram Kutateladze via a split decision in 2020. Since then, Mateusz has run through all of his opponents with 3 straight finishes.

With two amazing up-and-comers facing off against each other, the anticipation for the contest was beyond belief. How did the fight play out ultimately? Let’s find out.

The bout was everything that the fans thought it would be. From elite scrambles to heavy punching to dramatic switches in grappling positions, the bout had it all!

The early rounds of the bout were amazingly fought by both the fighter. Both Arman Tsarukyan and Mateusz Gamrot tried to establish the lead by securing an early takedown. But they soon found out how evenly matched they were. But the biggest development in the grappling came in the third round when Gamrot managed to get the back of Tsarukyan. But Gamrot was not able to sneak in a submission attempt.

This didn’t result in a takedown for Gamrot 🤯 #UFCVegas57 pic.twitter.com/htLSpY4qSI

Despite being on the back foot early in the round, it was Tsarukyan who ended the round in a strong manner as he landed multiple body kicks. He took the momentum to the 4th round as he landed a spinning back fist that knocked Gamrot down. But in a great show of grit, the polish fighter recovered and won the rest of the round with multiple takedowns.

We’re headed to the fifth & FINAL round – how’d you score those first four? 🧐 #UFCVegas57 pic.twitter.com/a0aSjr13uY

In the fight potentially hanging on that balance, the fifth round was crucial in the bout. Tsarukyan had a strong start as he scored the second knockdown of the bout with a vicious calf kick. But just like in previous rounds, Arman failed to follow up and ended up on the ground as Gamrot landed another takedown. However, Arman managed to get up without suffering much damage on the ground.

It was evident that Tsarukyan had the edge on the feet as Gamrot spammed him with takedowns. The bout ultimately ended with Arman on top, landing body shots on Mateusz. It was up to the judges to determine the winner of the bout and they favoured Mateusz Gamrot. All three judges scored the bout 48-47 as Gamrot won the bout via unanimous decision. He called out Justin Gaethje afterwards.