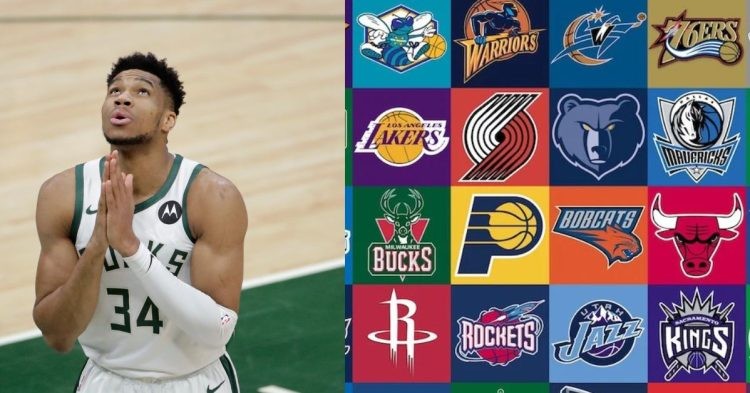 In light of the Golde State Warriors’ success, we are quick to forget what we saw from Giannis Antetokounmpo and the Milwaukee Bucks last year. Several NBA analysts are still of the opinion that the Greek Freak is currently the best player in the league. Giannis revealed which team he would want to play for in a future where he is no longer with the Bucks.

The back-to-back MVP has shown utmost loyalty to his franchise so far. Thus, he could be speaking hypothetically. However, it is still important to know what his preferential destinations are as we never know what could happen in the future.

Giannis Antetokounmpo loves the idea of playing with the Chicago Bulls

The Chicago Bulls are certainly an interesting choice. There is no arguing the franchise’s history and culture thanks to Michael Jordan. Be that as it may, the current team had been struggling in the eastern conference to make the playoffs. That all changed this season as Demar Derozan, Lonzo Ball, Alex Caruso, and several other new Bulls teammates helped make a push for the NBA playoffs.

The Bulls managed to get in this season. But, they were eliminated in the first round by, you guessed it, the Greek Freak and the  Milwaukee Bucks. Perhaps, Giannis saw something he liked in the young core. He did not reveal much and simply said, “Everybody would love to play for Chicago. Down the line, you never know. Maybe I play for Chicago.”

Giannis has been an NBA star for several years now. Fans from different franchises have been urging him in several ways to join their team. There is no arguing that the Bulls are a blood-hungry franchise desperate to become relevant again. If given the chance, they would certainly acquire the 2021 NBA Finals MVP.

At the end of the day, “you never know”. Antetokounmpo is under contract until the 2025-2026 season. He is definitely not the type of player to force his way out of a situation. After all, he still has a good chance to win another title with the Bucks in this time span.

The Bulls, on the other hand, would have to sacrifice several key pieces if they tried to trade for the Greek Freak. If something goes wrong between Giannis and the Bucks, now we all know what his first option will be.