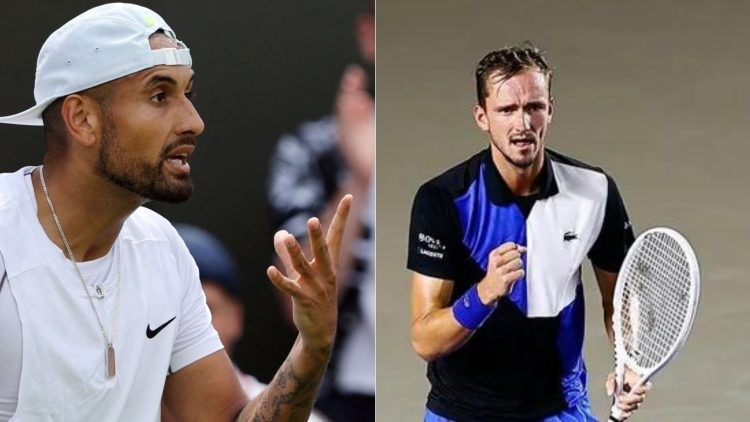 Nick Kyrgios has been facing his purple patch, since the start of Wimbledon. He dominated his opponents and reached the finals of Wimbledon only to be defeated by Novak Djokovic in a closely poised match. Nick proved to the tennis fans that on his day he can be as good as anyone out there on the tennis court.

After Wimbledon, he recently participated in the Citi Open which he won in a fashionable manner as well. He is currently participating in the Canadian Open in Montreal in order to have the necessary amount of practice for the upcoming US Open.

Nick is currently on a seven-match winning streak and he defeated Sebastian Baez in the first round fixtures of the Canadian Open with a 6-4, 6-4 and set up a mouth-watering clash with the current world number 1 and former US Open champion Daniil Medvedev in the second round fixtures.

After winning the first round fixture he stated,

“Medvedev is coming from a title too and he is the #1 in the world. It’s not like the rankings mean too much as the guy I played today is ranked ahead of me. But Medvedev is a machine.”

Nick would surely be high on confidence after enjoying a win in the Citi Open and extending his winning streak as well.

Nick Kyrgios sets up a clash with Daniil Medvedev

After winning the first round of the fixture against Sebastian Baez, Nick would be fired up to defeat Medvedev as well and extend his winning run to eight. With his impressive form in the current season, Kyrgios has risen to rank 33 in the ATP rankings.

Nick further mentioned that he would enjoy playing against Medvedev since he has a very unorthodox style in the game and he is a great competitor as well.

The last time both of these players faced each other in the Australian Open, Medvedev took the victory. However, this time around, Kyrgios would be looking forward to exerting revenge and winning the clash against the world number 1.