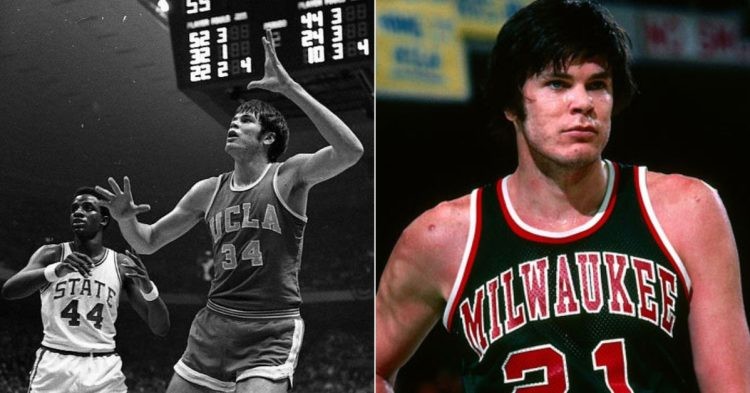 Dave Meyers, a 6′ 8” Forward, was one of the hottest prospects coming into the 1975 NBA draft, recording 18.3 points and 7.9 rebounds per game in his final season. His talent did not go unnoticed, as the Lakers made him the second overall pick at the draft.

The Lakers traded Meyers to the Milwaukee Bucks in exchange for Hall of Famer Kareem Abdul-Jabbar, who was already a three-time MVP.

He played for the Milwaukee Bucks for four seasons, recording 11.2 points and 6.3 rebounds a game before he hung up his boots.

After retiring from basketball, Dave devoted a lot of time to church work and took a sales job at Motorola.

How many players are Jehovah’s Witnesses in NBA?

David Meyers was not the last Jehovah’s Witnesses in the NBA, as years later, players of similar faith have played in the NBA. Some noticeable ones are Darren Collison, Danny Granger, and Dewayne Dedmon.

Darren Collison retired in 2019 to focus on his faith

Collison had a 10-year career in the NBA from 2009 to 2019, appearing for the Indiana Pacers, Sacramento Kings, Dallas Mavericks, New Orleans Pelicans, and both LA Lakers and Clippers.

In an article addressing his retirement Darren stated, “While I still love basketball, I know there is something more important, which is my family and my faith.”

Danny Granger’s career came to an abrupt end in 2015

Granger is another Jehovah’s witness who played for the Indiana Pacers. He shone for the pacers and became one of their best scorers during his nine-year stint at the Pacers, but his time in the NBA was continuously hampered by injuries, forcing him to retire in 2015.

He was so good before the injuries!

He also played for the Los Angeles Clippers and Miami Heat during his 10-year NBA career.

Granger grew up in a religious household by Jehovah’s Witnesses but was only baptized in 2017.

Dedmon, one of the best role players in the NBA, saw a shaky start to his career. The Warriors promoted and demoted him several times from 2013-2014. However, he found his way into the NBA after signing a contract with the Philadelphia 76ers.

Since then, he has played for the Orlando Magic, San Antonio Spurs, Atlanta Hawks, Sacramento Kings, and the Miami Heat.

Dedmon’s mother forbade him from playing basketball because of the family’s religious beliefs as Jehovah’s Witness, which meant he didn’t receive basketball training as a child.