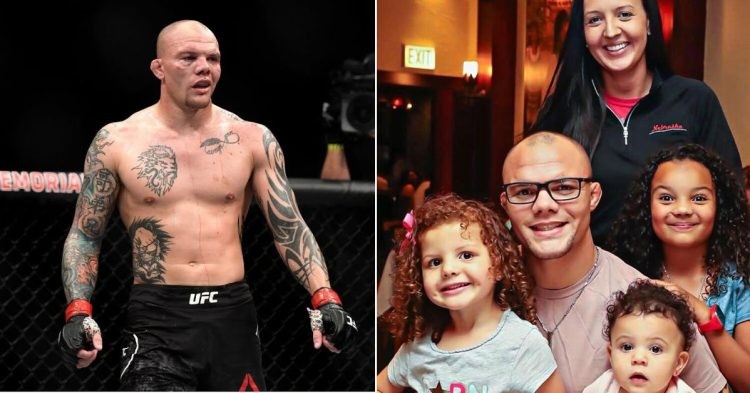 Anthony Smith with his wife and kids

Anthony Smith has been in the UFC for as long as one can remember. The former middleweight contender currently competes in the UFC’s light-heavyweight division. He has competed in over 50 professional MMA bouts, and has cemented his legacy as one of the greatest mixed martial artist of all time. Despite the popularity, very little is known about Smith’s personal life who likes to keep his private life away from the glitz and glamour of social media.

Fondly called the “Lionheart” for his resilience and toughness inside the cage, the former light-heavyweight title challenger continues to reign at the top of the UFC’s light-heavyweight division. With wins over the likes of Mauricio Rua, Rashad Evans, Hector Lombard, Volkan Oezdemir, Josh Neer, among others, Smith has cemented his position as one of the greatest mixed martial artist of all time.

Anthony Smith is married to Mikhala Renee Newman. The couple is blessed with three beautiful daughters. Smith often shares photos of his kids on his social media platform. According to PlayersGF, Anthony Smith and Mikhala Newman got married on September 20, 2019, in Omaha, Nebraska. Smith lives in Nebraska.

Mikhala Renee Newman has a degree in Nursing from Lutheran Liberal Arts University in Fremont, Nebraska, and currently works as a certified nurse. She is not active on social media, and very little known is about her personal life.

Most of Smith’s posts on social media are around his professional career as a mixed martial artist. We were also not able to locate a social media profile pointing to Mikhala Newman. Needless to say, due to Smith’s private nature, very little is known about Smith’s wife Mikhala Renee Newman.

Anthony Smith often showers his love for his beautiful daughters on the photo-sharing platform Instagram. Smith welcomed his third daughter Adley Joy on June 14, 2017. Smith took Instagram to share the news with the world. Needless to say, Smith has found motivation from his kids, and with over 50 professional bouts to his name, continues to reign at the top of the MMA world.

Anthony Smith was raised by his single mother and did not get the love of a father growing up. He dropped out of his senior year of college and started working part-time. Even during his UFC run, Smith found his major source of income by working as a concrete finisher.

Lionheart has already left a legacy behind him, and it will be interesting to see what lies ahead of his UFC career as he goes forward in his MMA career. Is there a chance that Anthony Smith can become the UFC’s light-heavyweight champion? Do let us know in the comments section.