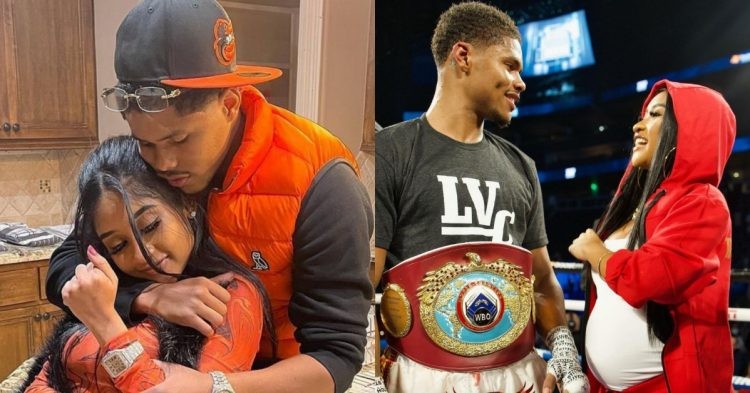 Shakur Stevenson is one of the most promising young boxers in the featherweight division. He first came to notice when he appeared in the 2016 Summer Olympics. In the event, he represented the USA and went all the way to the finals. However, he fell short in the bantamweight division finals as he was defeated by Robeisy Ramirez. But a silver medal was nothing to sneeze at.

He turned pro the following year and took on Edgar Brito. Since then, he has gone on to win titles in two separate weight classes. Shakur’s first title was at featherweight, where he beat Jessie Cris Rosales via 4th round TKO to win the vacant IBF Intercontinental and WBC Continental featherweight belts. He then grabbed the vacant WBO featherweight titles against Joet Gonzalez.

After the biggest of his career till that point, Stevenson went on one knee and proposed to his then-girlfriend and now fiance, Lyric Michelle Ragston aka Young Lyric. Making the moment even special, she immediately said yes.

Young Lyric was born in Houston, Texas on July 30th 2000. As mentioned previously, her real name is Lyric Michelle Ragston. She is a well-known musician who primarily puts out songs in the Hip-Hop genre. She has put out multiple albums so far. The very first album was called ‘Princess’ which came out in 2016 and the last came out in 2020, titled ‘The Real Lyric Michell, Vol 2.’

However, that is not it. As per Famous Birthdays, Lyric has collaborated with famous rapper Lil Wayne previously. Although she is still a very young artist, it looks like she has accumulated quite a resume for herself in the meanwhile. The website also notes that Lyric started dating Shakur in 2019 after breaking up with NBA YoungBoy.

Her Instagram account has over 1.6 million followers, while she has 113K followers on her official Twitter page. Being a musician she also has a YouTube channel which has 349K subscribers. So she has obviously done well for herself regardless of Shakur‘s status in the world of boxing.

Do Shakur Stevenson and Young Lyric have children together?

After starting to date each other in 2019, Shakur Stevenson and Young Lyric have a daughter together. On 6th December of 2021, Lyric gave birth to their daughter Leilani. She even made an appearance in one of Lyric’s songs called ‘Mirror Mirror.’

The arrival of a daughter is always a very special occasion in the life of a father and Steveson is no different. Both he and Lyric are extremely happy to have the company of their newborn.