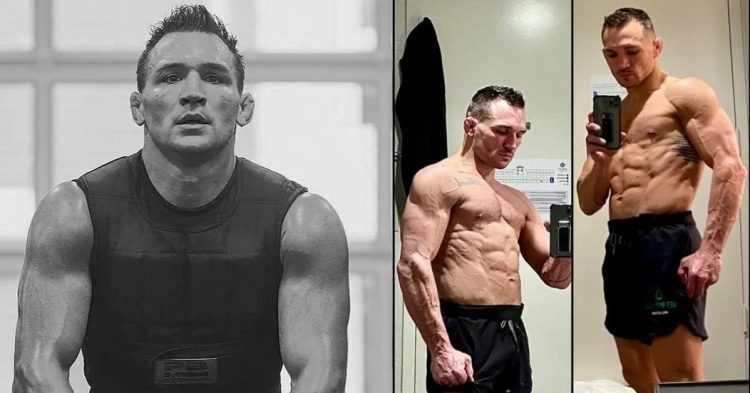 Joe Rogan describes Michael Chandler as a “ball of muscle” and rightfully so. Chandler is arguably the most muscular lightweight in the division right now. Even Conor McGregor will look pale compared to Chandler’s incredible physique that has the MMA world turning its heads.

Michael Chandler looks like a bodybuilder. Fans have even repeatedly raised suspicion of steroid use by the former UFC lightweight title challenger. Today, we take a look at what makes Michael Chandler look so athletic and muscular. Is it his diet or his secret training regime? Let’s have a look.

Michael Chandler revealed in a conversation with Brendan Schaub that he switched to a carnivore diet for his training camp against Tony Ferguson. Chandler looked every bit of a bodybuilder he has looked, with his monstrous power once again on display as he knocked out Tony Ferguson cold with arguably the most incredible front-kick KO we have ever seen.

Speaking about the carnivore diet, here’s what Chandler had to say. “So I actually started experimenting with it in my last training camp.” Chandler continued, “I was doing a lot of avocados, bone marrow, and then liver.”

While Chandler is quite strict with his training schedule, his fitness doesn’t come without the right nutrition and supplements. “As I’ve gotten older I realize that 80% of my weight management is having good supplementation and nutrition,” Chandler told Muscle & Fitness.

Michael Chandler is huge for his weight class. While he has never missed weight in the UFC, Chandler possibly walks around at the welterweight limit. Joe Rogan has even stated Chandler weighs 155-pounds only for twenty minutes, referring to the official weigh-ins ahead of his lightweight bouts.

Chandler’s supplements now include amino acids and protein powder for muscle recovery. He takes turmeric and ginger for inflammation and makes great use of multivitamins for general health purposes. A strict diet is added with some muscle-crunching workouts, and we get a true specimen for an MMA fighter in the form of Michael Chandler.