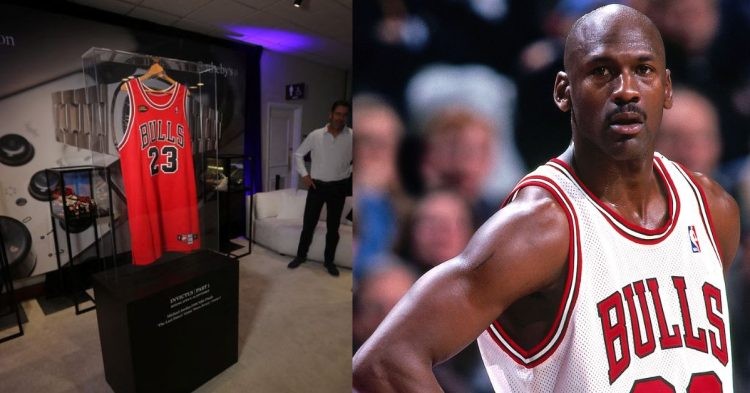 Michael Jordan is still widely proclaimed to be the best basketball player ever. NBA analysts have been comparing him and LeBron James for a while now. While everyone is free to have an opinion, very few can disagree that His Airness dominating and winning the Finals for multiple years is something we have not seen King James do.

This allows Jordan fans to claim that he is better. After all, MJ has never seen a Game 7 in the NBA Finals. He is viewed as a legend and has certainly backed it up. One of Jordan’s NBA Finals jerseys has been auctioned off for a record-breaking $10.1 million. It is important to know which jersey it is and why it was so heavily fought for.

To quickly recap MJ’s story. He was drafted by the Chicago Bulls and led them to become a powerhouse in the Eastern Conference. Moreover, alongside Scotty Pippen and Dennis Rodman, he helped Chicago win 6 titles. This came about in the fashion of two three-peats.

A three-peat refers to a team who has won the NBA title three times in a row. It would interest some people to know that there are only two franchises that have managed this accomplishment in recent times. Michael Jordan and the Chicago Bulls did it twice. Additionally, Shaquille O’Neal and Kobe Bryant’s Los Angeles Lakers also managed this feat.

Veteran NBA fans who saw MJ play know he retired briefly to pursue baseball in the middle of his career. Nonetheless, he decided to return and prove his dominance by leading the Bulls to 3 more tiles. One of the teams they faced in the NBA Finals was the Utah Jazz.

The Chicago Bulls and Utah Jazz were set to meet again in the 1998 NBA Finals. Jordan was already 35 years old when he took his team to the Finals for the last time. There is Game 1, MJ scored 33 points and led his team in scoring. However, they lost that game 85-88 to Utah.

That set off a monster in Michael Jordan and he carried the Bulls past the Jazz the next three games in a row. He finally eliminated them in Game 6 with one of the most famous shots ever.

Game 1 was the starting point for all of this. That is why over 20 Jordan fans bid for the Game 1 Jersey and it was finally sold for $10.1 million.