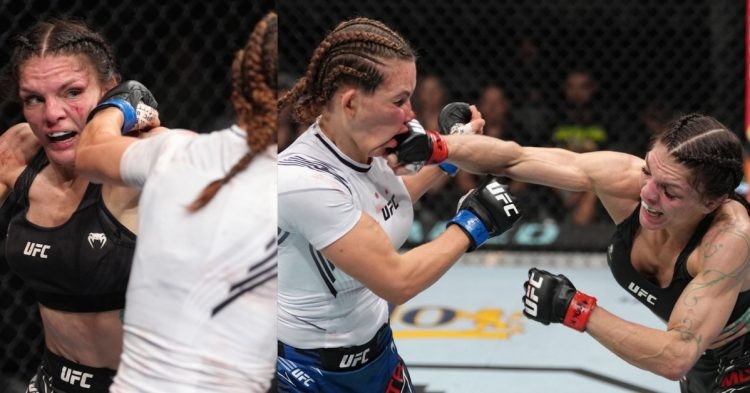 Lauren Murphy vs Miesha Tate just took place at UFC Long Island. It was the flyweight debut for the former UFC Bantamweight Champion Tate. She decided to move down to the 125lbs after falling short against Ketlen Vieira in her last fight. But the challenge waiting in front of her was not an easy one. Lauren Murphy was an elite opponent.

Murphy lost to Valentina Shevchenko in 2021 at UFC 266. However, Murphy had a great run of fights prior to her clash against Valentina. Hence, she promised to be a great opponent for Miesha. Winning against Murphy will have proved Tate’s viability at flyweight.

Time to bring the action over to @ABCNetwork 💥@LaurenMurphyMMA and @MieshaTate are ready to kick off this #UFCLongIsland main card! pic.twitter.com/UYYWksxFmQ

Valentina Shevchenko has cleaned out the 125lbs division pretty much on her own. She is even looking to move up to bantamweight to challenge the winner of Julianna Pena vs Amanda Nunes 2. However, she did express her desire to face Tate before making the jump. So, was Miesha Tate able to earn the chance to fight for the belt? Let’s find out.

Lauren Murphy put Miesha on the back foot very early on in the fight. Although Miesha did manage to almost secure a takedown, Murphy sprawled out of it very swiftly. She then followed it up with some good knees in the clinch. They circled around the Octagon for a while as they tried to figure out each other’s game plan. But to everyone’s surprise, Lauren almost secured a takedown herself.

After a few brief moments of clinch control for Murphy, Tate reversed the position and attempted another takedown on the 38-year-old. The bout looked to be in the balance heading into the second round.

First 5 minutes in the books 📚

Lauren Murphy decided to change up her foot movement and started moving laterally. She also started using the jab very well and busted Miesha up. Taking advantage of that, Lauren level-changed and secured the first takedown of the bout. Although Tate did not spend too much on her back, Murphy pretty much controlled the pace of the bout.

However, a failed takedown attempt led to Miesha getting the upper hand in the last minute of the round and Tate made her with a few brutal elbows to end the round.

Lauren Murphy’s takedown defence held up in round 3 as well. Meisha understood that taking the fight to the ground was her only option to win the bout. However, Murphy seemed too strong for Miesha as the veteran fighter went all night without getting taken down.

Following the bout, Twitter flooded with reactions which called for Miesha Tate to retire.

Here are some of the reactions from the fans.

Miesha Tate needs to give it up

I love @MieshaTate so I don’t want this to come off as badmouthing her
Miesha if you want this comeback to be successful hurry down to fight ready and let .@HenryCejudo get to work
I get it he’s a character but you know that’s only outside of the gym inside all pro