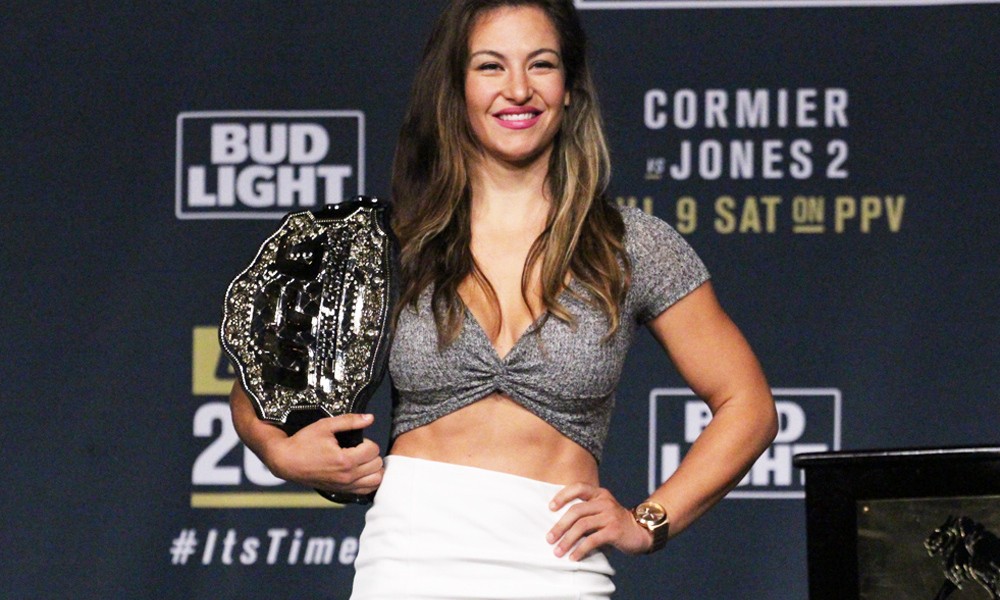 One of the pioneers in the women’s mixed martial arts, Miesha Tate has hold world titles in two different organizations, UFC and StrikeForce.

Miesha Tate beat Hitomi Akano in 2010 to become the Strikeforce champion. She would then go on to lose the title to her arch-nemesis and the biggest female star in MMA, Ronda Rousey. The rivalry between these two MMA legends would not end there as they would rematch in UFC as well.

Besides that, Miesha Tate also won the UFC bantamweight champion by beating Holly Holm in 2016 on one of the biggest cards ever in UFC 196: McGregor vs Diaz 1. After a 5 round war, Tate submitted Holm in round 5 to win the fight.

Unfortunately, Miesha Tate would not go on a long title reign as she would lose to the greatest and most accomplished female fighter in UFC, Amanda Nunes in the next fight.

It’s needless to say that Miesha Tate has achieved some huge feet in her career. In a time where fans were unsure about women’s MMA, she made the world believe that women mixed martial artists can also put on a fight in the octagon while showcasing high-level skills. But was she rewarded for her contribution to the MMA community handsomely? Let’s find out.

Read More: Why did Miesha Tate retire from MMA?

Miesha Tate made her UFC debut on the Ultimate Fighter 17 Finale against Cat Zingano but she suffered a knock-out loss in her first fight in the organization. Nevertheless, she earned a fight purse of $78,000 including $50,000 of Fight of the Night bonus. This was a huge bump in the fight purse for Tate considering she earned only $30,000 for her last fight in StrikeForce before she decided to come to UFC.

The former bantamweight champion would then go on to fight Ronda Rousey for the UFC bantamweight title and she earned a fight purse of $103,000 despite the loss to Rousey. It was also declared the fight of the night and she received a bonus of $75,000. This fight took place on UFC 168 and Tate was the co-main event of this huge PPV.

Read More: Everything you need to know about Miesha Tate’s husband and family

However, after winning the UFC title, Tate would earn the biggest payday of his career for his title defense against Amanda Nunes. Tate would earn a massive $540,000 fight purse including $40,000 for Rebook sponsorship. Tate lost her title to Nunes and she would leave UFC after one more fight.

The last fight purse Tate received from UFC was a modest $60,000, which she earned for the fight against Raquel Pennington. Overall, Tate has earned over $1.3 million throughout her UFC journey from fight purses.

We can expect Miesha Tate to earn somewhere around $200k for her return on UFC Vegas 31. And with Max Holloway vs Yair Rodriguez out of the card, Miesha Tate is now the co-main event of the night.