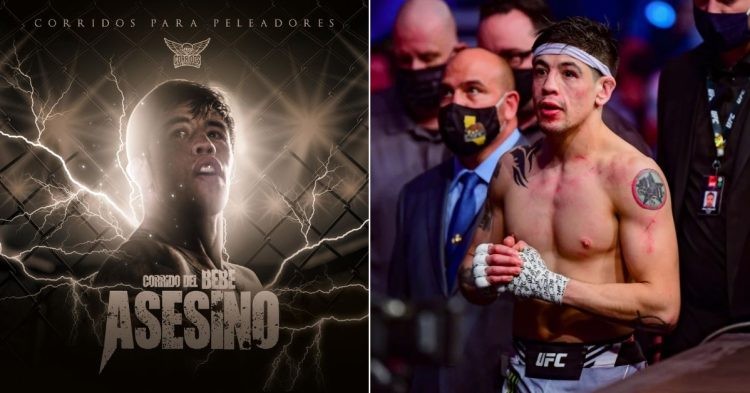 Brandon Moreno has emerged as one of the most popular mixed martial artists in recent times. Moreno’s increasing popularity has seen him become a top face in the company, and rightfully so.

Brandon Moreno never fails to put up exciting performances whenever he steps inside the cage. The youngest UFC champion from Mexico is all set to take on Kai-Kara France for the interim flyweight championship in the co-main event of UFC 277.


It goes without saying, the anticipation for a fight includes a walkout as the audience cheer for their favorite fighters when they walk to the Octagon humming to their music. Today, let’s take a look at the list of songs Brandon Moreno has walked out to in notable fights during his UFC career.

Brandon Moreno has walked out to “El Corrido Del Bebe Asesino” by Ariel Macias for as long as one can remember. Moreno has used the same song to make his walkout all the way from his UFC return against Askar Akarov back in September of 2019.


Moreno walked out to El Corrido Del Bebe Asesino back at UFC 245 when he took on Kai Kara France for the first time and has since then used the same song for each of his appearances at UFC Fight Night: Lee vs Oliveira, UFC 255, UFC 256, UFC 263, and UFC 270.

There’s every chance that Brandon Moreno will walk out to El Corrido Del Bebe Asesino in his rematch against Kai-Kara France at UFC 277.

However, that is not the only song Brandon Moreno has used as his walkout song during the course of his UFC career. During Moreno’s first stint with the UFC, the Mexican fighter made his walk to the Octagon on “Glorious” by Macklemore feat. Skylar Grey during his fight against Alexandre Pantoja back in May of 2018 at UFC Fight Night: Maia vs Usman.

Moreno made his walk to the Octagon on “Cuando tu no estas” by El Tri for his main event fight against Sergio Pettis back in August of 2017.

While the choice of the song may have changed earlier in his career, Brandon Moreno has stuck to “El Corrido Del Bebe Asesino” by Ariel Macias for his walkout song for quite some time now.