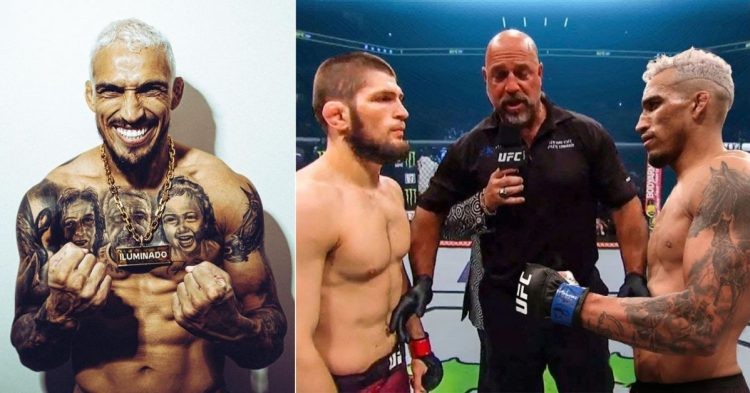 One thing is certain, should Charles Oliveira get past Islam Makhachev this weekend at UFC 280 in Abu Dhabi, the Brazilian sensation would undoubtedly receive the consensus of being the greatest lightweight fighter of all time.

Charles Oliveira is already garnering the reputation of being the greatest lightweight of all time, but a victory this weekend would rest any and every other argument to rest. Why? Because Islam Makhachev has been touted very highly by Khabib Nurmagomedov himself that it’s equally hard to imagine someone beating the Dagestani fighter, just like Khabib during his UFC career.

Fans took to social media to rally behind Charles Oliveira to beat Islam Makhachev and in the process put a rest to Khabib Nurmagomedov’s GOAT status in the lightweight division. Not just fans, even former Middleweight Champion Michael Bisping has stated that a win over Islam Makhachev would make Oliveira the GOAT of the 155-pound division. Check out some reactions here.

@CharlesDoBronxs when you win on Saturday, the Islam team will say it’s his lack of experience. They put him in front of you, you take him out. Easy in my opinion. Call out Khabib after the W and get the biggest payday and legacy. Purchasing my blonde dye today.

Islam has more pressure.
If he loses khabib and abdulmanap legacy is destroyed

Ayo put some respect on the champ’s name😤
We bury khabib’s overrated legacy on oct 22 in sands of abu dhabi. https://t.co/BjdWfbDuYj

No one will ever change that statistic.

And it’s a emphatic one..

Khabib legacy is at stake for #ufc280! Charles Oliveira is coming to war to capture Dagestanis & cement his legacy as lightweight GOAT !#UFC #MMATwitter

I speak for EVERYONE on this fcking app when I say we want Olivera to get injured on Oct 22!! #ufc

He is a clear threat to Khabib’s legacy and I cannot risk him beating Islam. pic.twitter.com/4KEYmgws0F

Javier Mendez has also shared his thoughts on Makhachev’s striking compared to Nurmagomedov and believes that Islam is better than Khabib when it comes to skills on the feet. Khabib himself has solidified Islam Makhachev as the best lightweight fighter on the UFC roster, and overcoming all these claims and remarks would mean Charles Oliveira will certainly mark his name in the history books as the greatest lightweight fighter of all time.

There’s no denying the stand-up skills of Chute Boxe Academy protege Charles Oliveira. Having beaten the likes of Justin Gaethje, Michael Chandler, Tony Ferguson, and Dustin Poirier among others, Oliveira has proven his skills on the feet against the elite strikers of the lightweight division.

While Khabib Nurmagomedov has completely disregarded Oliveira’s ground game, one must not forget that Do Bronx holds the record for most submission wins and the most finishes in UFC’s history. Regardless, Makhachev’s grappling prowess cannot be overlooked, but Oliveira’s experience and tenacity inside the cage could prove to be too much for Islam Makhachev, who is yet to test himself against the absolute best of the division.