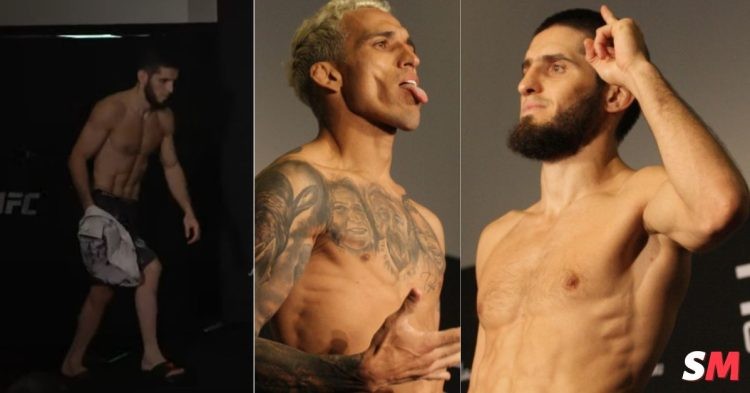 Alexander Volkanovski has revealed that the UFC called him at night to be ready in case something happens to the main event. The featherweight champion revealed one of the fighters is having trouble making the weight for UFC 280, and he was asked to be ready as the backup should the opportunity arise. Volkanovski refused to reveal who the fighter was, but it seems like it could be Islam Makhachev as far as the weigh-in result is concerned.

UFC fans also pointed Islam Makhachev out after listening to Alexander Volkanovski, and one wonders how much truth is there to Volkanovski’s statements.

Charles Oliveira and Islam Makhachev both successfully made weight a few hours ago, and the UFC 280 main event will go as scheduled. However, doubts still linger regarding the health of one of the fighters, and it will be interesting to see what follows.

Check out some wild reactions from fans, reacting to Alexander Volkanovski’s news about UFC 280.

Isn’t it obvious? Islam looked horrible. All week they were talking it was going to be an easy make. They even told Alex not to cut weight.

Looks like Islam, he looked bad on the scale.

If UFC 280 main event gets scrapped, it will be one of the biggest let down in the history of the company. Fans have been waiting for a really long time for both these fighters to share the Octagon, and less than two days away now, it will certainly be a bummer if the fight falls out.

Islam Makhachev successfully made weight for UFC 280. However, the Dagestani fighter looked visibly drained for the weigh-in. While there’s no confirmation regarding the fighter mentioned by Volkanovski, fans are convinced after looking at the weigh-ins, that Volkanovski could be referring to Makhahcev as the fighter “struggling to make weight.”

Oliviera stepped in at 154.5 lbs, successfully making the championship weight for the title fight against Islam Makhachev in Abu Dhabi. Oliveira sprinted off to the stage, meanwhile, Makhachev looked quite tired and walked slowly to the weigh-in scale. Be that as it may, Islam also stepped on the scale at 154.5 lbs, and the fight is officially confirmed to take place at UFC 280.