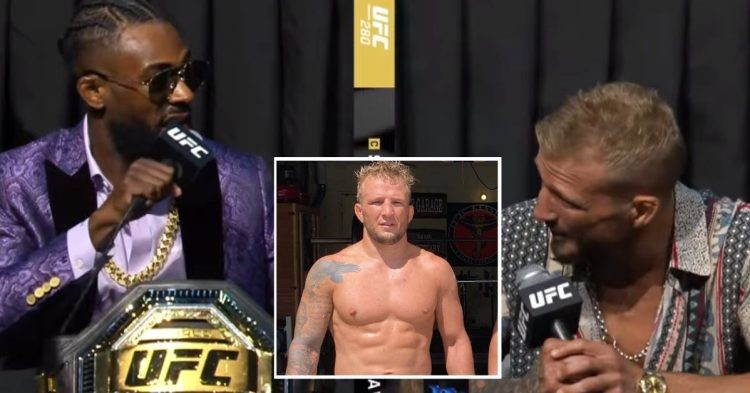 Aljamain Sterling has a bizarre theory on why TJ Dillashaw will test positive for steroids after UFC 280. The duo will share the cage this weekend at UFC 280 for the Bantamweight gold. Ahead of what promises to be an epic showdown, accusations of steroids from Sterling are already rife.

In the lead-up to the fight, Sterling stated that he is confident that Dillashaw is looking for one or the other way to cheat in the upcoming fight. When asked the same question during the UFC 280 press conference, Sterling had an interesting theory on why he believes Dillashaw will once again pop for PEDs.

“You guys are all familiar with the Embedded episode. For some reason, I haven’t seen TJ in any of the Embedded episodes. That’s how he got caught last time. I wonder if there’s something going on again. That might be a little fishy TJ.” Sterling said.

Pointing to Dillashaw’s absence from UFC Embedded the last time he fought for the title back in January 2019, Sterling’s bizarre theory did have the attention of some fans. In a recent photo posted by Dillashaw, fans pointed out the bumps on Dillashaw’s stomach as injection marks in what appeared to be nothing but sweat beads after a tiring day of practice.

When did TJ Dillashaw test positive for steroids?

TJ Dillashaw popped for EPO following his fight against Henry Cejudo back at UFC Fight Night in January 2019. A small reminder to Sterling, the event was not on PPV and hence did not have UFC Embedded. Be that as it may Dillashaw tested positive for steroids after the fight and owned up to his mistake.

The Bantamweight Champion relinquished his bantamweight title and was later handed a two-year suspension. He made his return last year in June and put on a Fight of the Night performance against a very dangerous Cory Sandhagen. Dillashaw won the fight via a split decision to book himself a title fight.

Almost 400 days later since then, Dillashaw will look to create history as he takes on Aljamain Sterling in an attempt to become a three-time UFC Bantamweight Champion.