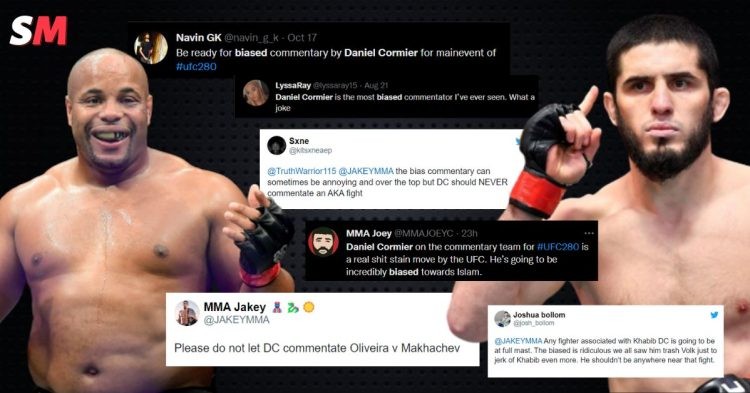 Daniel Cormier has been at the receiving end of some harsh criticism for his thoughts on Islam Makhachev vs Charles Oliveira.

It’s a no-brainer that Cormier and Makhachev are close friends, having trained at AKA for more than a decade together. And ahead of the biggest fight of Makhachev’s career where he stands just one step away from holding the UFC lightweight gold should he get past Charles Oliveira, Cormier’s views on the match-up have been branded as “biased” by many.

Fans even opined how Daniel Cormier should not be given the broadcasting duties for UFC 280, expecting a biased commentary towards his friend Islam Makhachev. The amount of “disrespect” shown towards Charles Oliveira from Khabib Nurmagomedov and his team has already angered the fans, and now Cormier’s views on the fight and the fact that he is close to Islam Makhachev are seemingly getting on their nerves.

Clearing the air around his views on the fight, a furious Daniel Cormier spoke his heart out as he blasted UFC fans for expecting him to “crap on his friend” Islam Makhachev.

Daniel Cormier on the commentary team for #UFC280 is a real shit stain move by the UFC. He’s going to be incredibly biased towards Islam.

“I do believe that Do Bronx has the style and the ability to fight and beat Islam Makhachev. I have always said that. But it’s almost like people want me to go and kind of crap on my friend.”

“I am not gonna crap on my friend to make you feel better. I believe and I am confident that he can win the fight and become the champion but I do recognize that this is by far the most difficult challenge that Islam Makhachev has ever had in his entire UFC career.” Cormier said on the recent episode of DC&RC.

While it’s one thing to say Daniel Cormier is biased, one cannot deny that Islam Makhachev has been absolutely dominant. It’s another scenario where Makhachev ends up losing the fight and gets dominated as fans hear Cormier still praising the Dagestani fighter, it’s another when Makahchev continues to put up performances as he has in his recent fights.

UFC should not let Daniel Cormier commentate Charles Oliveira vs Islam Makhachev.
He is too biased as you can see here: pic.twitter.com/beUWAF25hK

DC is always biased towards te people he like, but he is still great to have on the mic.

Moreover, Cormier’s views on Charles Oliveira have been quite respectful to say nonetheless. Showing support for his fellow friend all the while handling the duties of a commentator can be tough, and Cormier might be paying the price for the same.

Do you think Daniel Cormier has been biased behind the commentary desk? Do let us know in the comments section.