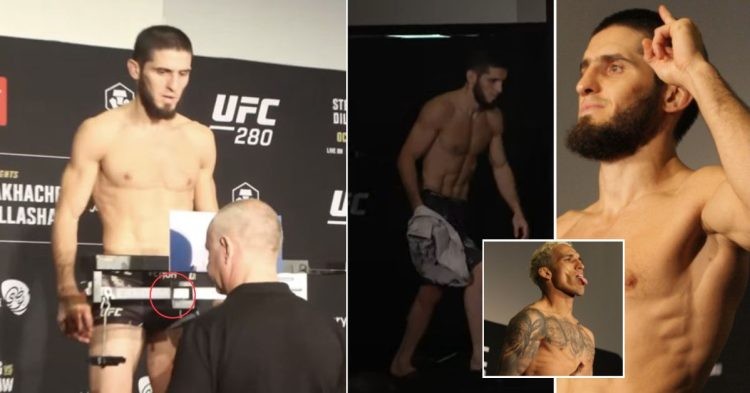 Once again in Abu Dhabi, we have a Khabib Nurmagomedov-Justin Gaethje situation after Islam Makhachev seemingly missed weight for his title fight at UFC 280 against Charles Oliveira. Various theories have surfaced online, as Oliveira and Makhachev’s fans continue to defend their favorite fighter over the alleged botched weight cut.

The video doing rounds on the internet is of Makhachev’s official weigh-in from several hours ago. Fans are pointing out the fact that the needle did not stop moving as the weigh-in result was announced. Meanwhile, the fact that the person reading the scales did not have his glasses on, unlike all the other fights he was in charge is also garnering the attention of fight fans around the world.

funniest thing is old boy reading the scales wears his glasses for all weigh ins EXCEPT islam hahaha pic.twitter.com/VjTNcgzCua

Meanwhile, Makhachev’s fans are accusing Oliveira’s fans of trying to come up with one or the other “excuse” in the lead-up to the UFC 280 fight. Some even pointed out how it’s really Oliveira who has had trouble making weight, citing the example of his last fight against Justin Gaethje where Do Bronx failed to hit the Championship weight limit.

Bro it’s fun to be a fan of both guys, but tbh, Charles fans have been annoying during this. All it ever is, is accusing someone of something, or taking it too far, y’all act like Conor fans. It’s sad that nobody is surprised that people are tryna make something out of nothing.

oh hey look what we have here 😂😂 you guys are a bunch of losers honestly https://t.co/yGSROV5nH5

Meanwhile, some other fans also pointed out how even in the case of Charles Oliveira, the needle did not really fully settle before the weight was announced. Both Charles Oliveira and Islam Makhachev stepped in at 154.5 pounds to make the title fight official at UFC 280.

Moreover, comments from Alexander Volkanovski regarding a call from UFC about a fighter from the UFC 280 main event struggling to make weight also added more fuel to these reports.

The controversy regarding the scale is nothing new. In the past, several fighters have made advantage of the weighing scale used during official weigh-ins, with Daniel Cormier even confirming he cheated on the scale. In the past, fans had raised the same questions they are raising now during Khabib Nurmagomedov’s weigh-in for UFC 254.

Why don’t they put a digital scale? They don’t put it because that way they can play with the weight. At night Islam was having trouble cutting the weight and now this strange weigh-in. Dana wants Islam to win and that’s why they rigged the scale at UFC 274 too.

It’s safe to say digital scales would solve a lot of problems. The debate around whether the needle settled or not won’t even be a question with a digital scale, and moreover, it will help fighters and the organization function more professionally.