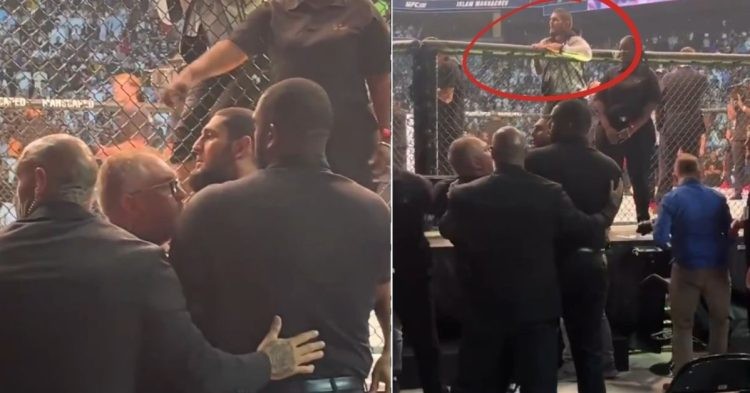 Chaos ensued moments after Islam Makhachev submitted Charles Oliveira to become the undisputed UFC lightweight champion of the world as Khamzat Chimaev got into it with Team Makhachev outside the cage. The video doing rounds on social media clearly shows Khamzat Chimaev yelling at Makhachev’s corner, as Khabib Nurmagomedov watches the entire drama unfold from inside the Octagon.

In the background, Islam Makhachev’s post-fight Octagon interview is still on. There’s no clarity on how the banter started and what prompted Khamzat Chimaev’s unruly behavior outside the cage.

Earlier, it was reported that Khamzat Chimaev was stuck in Russia and his passport was seized. However, Chimaev’s manager called false on those reports. Chimaev was spotted at UFC 280 with Ramzan Kadyrov’s son.

Why did Khamzat Chimaev get into a brawl with Abubakar Nurmagomedov?

In a recent video, Khamzat Chimaev can be seen sharing some words with Khabib Nurmagomedov’s teammate Abubakar Nurmagomedov. While it’s not clear what prompted the exchange, it did culminate into an ugly scene outside the cage moments after Islam Makhachev submitted Charles Oliveira to become the new undisputed lightweight champion of the world.

Chimaev and Abubakar can be seen shaking hands as the dup exchange some words. It is at this point that Chimaev pushed him, igniting what could have been uglier had it not been for the security.

The physical altercation between both fighters is certain to make headlines, and with Khabib Nurmagomedov in the backdrop, it will be interesting to see what follows this story.

The reaction from fans was outrageous as well who thrashed Khamzat Chimaev for yet another ugly incident. Earlier, Chimaev was involved in a fight with Kevin Holland backstage moments before UFC 279 press conference.

Dana White has revealed that Borz could take on Colby Covington in the co-main event of UFC 285 in London next year. However, there has been no confirmation regarding the same.