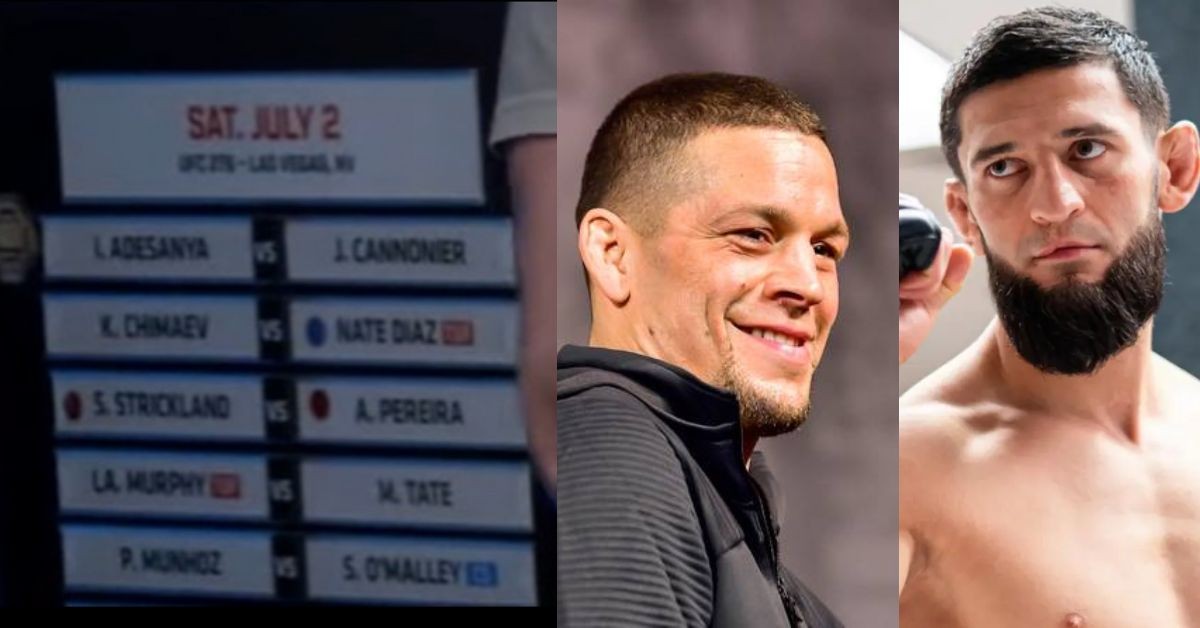 It seems like UFC President Dana White may have given away too much with his recent appearance on The Pivot Podcast. While White might not have expected it to happen, however, fans were too sharp to notice some details on the board, as White invited The Pivot to the UFC Headquarters for the episode.

In the screengrab from the video shared by many fans on the web, here’s what the UFC 276 card set to take place on July 2 looks like.

Israel Adesanya vs Jared Cannonier for the UFC’s Middleweight Championship will the main event of UFC 276 on July 2. While the venue has not been decided, it was earlier reported that both the fighters had signed the contract.

Nate Diaz returns to the Octagon against Khamzat Chimaev

After a blistering performance against Gilbert Burns back at UFC 273, Khamzat Chimaev will look to steal the limelight once again as he takes on the Stockton Slugger Nate Diaz in the co-main event of UFC 276.

While the fight hasn’t been confirmed yet if the match-board in the UFC Headquarters is what the promotion is planning, then we are certain, Chimaev vs Nate Diaz is a go!

Sean O’Malley also marks his return to the cage against Pedro Munhoz, in what promises to be a striking exchange. O’Malley was last seen against Raulian Paiva back at UFC 269, which saw him secure his third straight stoppage win inside the cage.

Other bouts on the proposed card include Lauren Murphy against Miesha Tate and Sean Strickland vs Alex Pereira.

It goes without saying, it’s one of the most exciting cards we have seen in some time, and that includes the upcoming UFC 274 which will see Charles Oliveira step inside the Octagon against Justin Gaethje, and Rose Namajunas defend her flyweight gold against Carla Esparza.

The return of Tony Ferguson is also equally enticing. El Cucuy takes on Michael Chandler next. Needless to say, there couldn’t have been a better time.

“I Will Never Say I Was at Their Level” – Andy Murray Reacts to Comparisons With Federer, Nadal and Djokovic